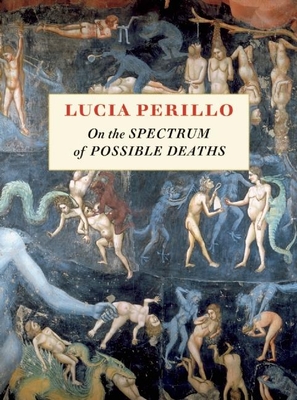 On the Spectrum of Possible Deaths

"Perillo has long lived with, and written about, her struggle with debilitating multiple sclerosis. Her bracing sixth book of poems takes an unflinching, though not unsmiling, look at mortality."--Publishers Weekly, starred review

"The poems in On the Spectrum of Possible Deaths are taut, lucid, lyric, filled with complex emotional reflection while avoiding the usual difficulties of highbrow poetry."--The New York Times Book Review

From "Victor the Shaman":

I feel the need for more humanitybecause the winter wren is not enough, even with its complicated music emanating

from the brambles. So I relent to my friendwho keeps bugging me to see her shaman, tutored by the Indians who live at the base

buried to the wrist in Satan's brisket, while the princeof dark jabs the angel's kisser . . .

Lucia Perillo grew up in the suburbs of New York City in the 1960s. She graduated from McGill University in Montreal, completed her MA in English at Syracuse University, and for most of the 1990s she taught in the creative writing program at Southern Illinois University. She currently resides in Olympia, Washington.

Lucia Perillo: Lucia Perillo graduated from McGill University in Montreal in 1979 with a major in wildlife management, and subsequently worked for the US Fish and Wildlife Service. She completed her MA in English at Syracuse University, and has published five books of poetry. She was a MacArthur Fellow in 2000 and finalist for the Pulitzer Prize in 2009. She lives in Olympia, Washington.
Loading...
or support indie stores by buying on