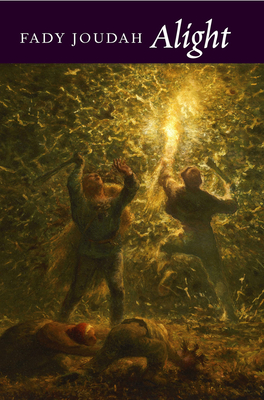 "With anatomical precision, Joudah illustrates scenes that are at once uncanny and contemporary, be it a Bedouin woman's lavender mourning veil, the chrome doors to an alchemist's home, or the mysterious speaker in 'Smoke, ' who exits abruptly and claims to have 'scripts to write and scrolls to find, ' a testament to the duties of attending physician and displaced poet alike. In both roles, Joudah has records to keep and history to revisit, and does so beautifully."--Booklist

"Joudah's poetry is rich with the influences and styles of both American and Arabic poetry. It can be personal and image-driven, by turns, as well as discursive and social. Its lyric gifts are as powerful as its narrative impulse."--Kenyon Review"Throughout Alight's carefully structured arc of movement and within its individual poems, the quotidian resides within the mythic. Joudah's is an art written out of experience, rather than about it...Poetry like Joudah's strikes a match into our dark places."--Poet Lore

The poems in Alight alternate between the estranging familial and strangely familiar, between burning and illumination. As father, husband, and physician, Fady Joudah gives children and vulnerable others voice in this hauntingly lyrical collection, where, with quiet ferociousness, one's self can be reclaimed from suffering's grip over mind and spirit.

Fady Joudah is a Palestinian-American poet, translator, and physician of internal medicine. He received his medical training from the Medical College of Georgia and University of Texas, and served with Doctors Without Borders in 2002 and 2005. His first book, The Earth in the Attic, won the 2007 Yale Series of Younger Poets competition, judged by Louise Gl ck. In 2010 he received a PEN translation award for his translations of Palestinian poet Mahmoud Darwish.

Fady Joudah: Fady Joudah is a poet, translator, and emergency room physician. Born in Austin, Texas, and the son of Palestinian refugees, he was raised in Libya and Saudi Arabia. Joudah received his medical training from the Medical College of Georgia and University of Texas, and has traveled the world with Doctors Without Borders, providing medical assistance to those harmed by violence and catastrophe. His first book, "The Earth in the Attic, " won the 2007 Yale Series of Younger Poets competition, judged by Louise Gluck. In 2010 he received a PEN translation award for his translations of Palestinian poet Mahmoud Darwish.
or
Not Currently Available for Direct Purchase
Copyright © 2020 American Booksellers Association