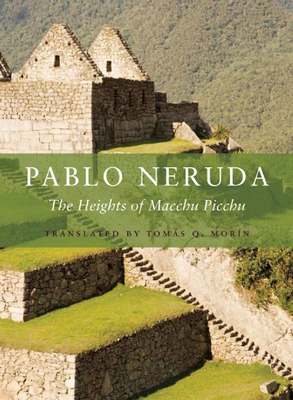 The Heights of Macchu Picchu

The most important poet of the twentieth century--in any language.--Gabriel Garcia Marquez

'The Heights of Macchu Picchu' is a poem of ascension. . . . In its final passages, Neruda's poetry jumps from a personal hope to a global one; from a poetry dealing with the poet's heart to a poetry centered on humanity's struggles.--BBC

The Heights of Machu Picchu has been called Pablo Neruda's greatest contribution to poetry--a search for the indestructible, imperishable life in all things. Inspired by his journey to the ancient ruins, Neruda calls the lost Incan civilization to rise up and be born, and also empowers the people of his time. This new translation by poet Tom's Q. Mor n includes an introduction by Mor n and Neruda's Spanish original.

I stare at the clothes and hands,
the carvings of water in a sonorous hollow,
the wall rubbed smooth by the touch of a face
that with my eyes gazed at the earthly lights,
that with my hands oiled the vanished
planks: because everything, clothes, skin, dishes,
words, wine, breads,
went away, fell to the earth.


Pablo Neruda (1904-73), one of the world's most beloved poets, was also a diplomat and member of the Chilean Senate. In 1970 he was appointed as Chile's ambassador to France; in 1971 he was awarded the Nobel Prize in Literature.

Tom's Q. Mor n is a poet and translator and teaches at Texas State University.