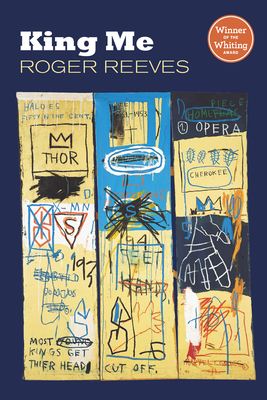 "A sophisticated and breathtaking writer, Reeves takes the reader on a harrowing journey: each poem comes packed with arresting imagery, relentless in its examination of how tragedy and trauma become internalized -- cleaning out the wounds to understand the pain."--Los Angeles Review of Books

"Roger Reeves' King Me stitches together many worlds into one startling and visceral book. His ranging, encyclopedic knowledge crosses history, medicine, biology, metapoetics and more, but he tackles it all with a bold and sonorous surrealist flow."--American Microreviews

From a horse witnessing the lynching of Emmett Till to Mikhail Bulgakov chronicling the forced famines in Poland in the 1930s, King Me examines the erotics of care and the place of song, elegy, and praise as testaments to those moments. As Roger Reeves said in an interview, "While writing King Me, I became very interested in the mythology of king, the one who is sacrificed at the end of the harvest season. . . . For me, the myth manifests in the killing of young black men, Emmett Till, and in the ways America deems young, black male bodies as expendable--Jean Michel Basquiat, Mike Tyson, Jack Johnson. These are the young kings whom we love to kill--over and over again."

From "Some Young Kings":

The hummingbirds inside my chest, with their needle-nosed pliers for tonguesand hammer-heavy wings, have left a messof ticks in my lungs and a punctured lullabyin my throat. Little boy blue come blowyour horn. The cow's in the meadow. And Dorothy's alone in the corn with Jack, his black fingers, the brass of his lips, the half-moons of his fingernails clickingalong her legs until she howls--Charlie Parker. Charlie Parker. Charlie Parker . . .

Roger Reeves earned his MFA from the James A. Michener Center for Creative Writing and his PhD from the University of Texas. His poems have appeared in Poetry, American Poetry Review, and Boston Review. He teaches at the University of Illinois, Chicago.

Roger Reeves: Roger Reeves earned his MFA from the James A. Michener Center for Creative Writing, and is currently a Ph.D. candidate at the University of Texas and an assistant professor of poetry at the University of Illinois, Chicago. His poems have appeared in Poetry, American Poetry Review, and Boston Review.
or
Not Currently Available for Direct Purchase
Copyright © 2020 American Booksellers Association