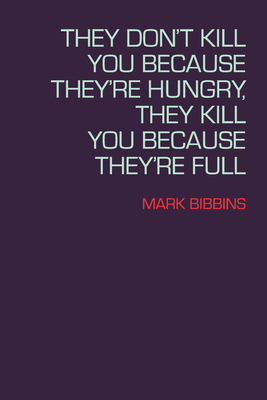 The book's a little crazy, packed with air quotes and brackets, jokes and condemnations, forms that explode across the page. Crazily enough, it's also packed with truth."--NPR

"The voice of this third book from Bibbins is marked and numbed by the onslaught of American media and politics that saturate the Internet, television, radio, and smartphone: 'the way things are going, children/ will have to upgrade to more amusing.' Much like advertisements or news stories vying for viewer's attention, the book intentionally overwhelms, eschewing sections; the author instead differentiates the poems by repetition, creating a sort of echo chamber, similar to the way viral information cycles through social media platforms."--Publishers Weekly, starred review

A] hilarious send-up of contemporary values and an alarm bell of sorts, directing attention to all that is so sinister in our civilization."--American Poets

Whip-smart and wickedly funny, They Don't Kill You is Bibbins's most authoritative and self-possessed collection to date.--Boston Review

The poems in Mark Bibbins's breakthrough third book are formally innovative and socially alert. Roving across the weird human landscape of modern politics, media-exacerbated absurdity, and questionable social conventions, this collection counters dread with wit, chaos with clarity, and reminds us that suffering is small//compared to what?