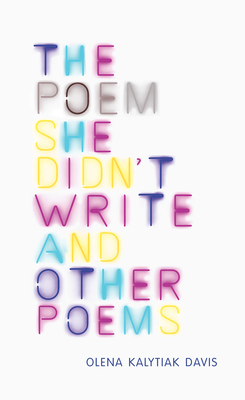 The Poem She Didn't Write and Other Poems

"The Poem She Didn't Write is a breakup book, full of the kinds of invective and taunts honed by a person who has spent, as all of us have now spent, infinite hours online. Its complex tones arise from the poet's wanting equally to seduce and to repel a lover whose deepening silence only provokes rhetorical escalation. The effect can be like reading e-mails in someone's drafts folder--but who wouldn't want to read Davis's drafts?--Dan Chiasson, The New Yorker

"Davis' first full collection in a decade should be stamped with the warning, 'Buckle up , ' because entering this writer's mind is one wild ride of digression, mutation, and syntactical and typographical experimentation... Davis has clearly put the poetic rule book through a shredder, and there's much to appreciate about that."--Booklist

There is an eerie precision to her work--like the delicate discernment of a brain surgeon's scalpel--that renders each moment in both its absolute clarity and ultimate transitory fragility.--Rita Dove

In her first full collection in a decade, Olena Kalytiak Davis revivifies language and makes love offerings to her beloved reader. With a heightened post-confessional directness, she addresses lost love, sexual violence, and the confrontations of aging. In her characteristic syntactical play, sly slips of meaning, and all-out feminism, Davis hyperconsciously erases the rulebook in this memorable collection.

From The Poem She Didn't Write:

began
when she stopped

began in winter and, like everything else, at first, just waited for spring
in spring noticed there were lilac branches, but no desire,
no need to talk to any angel, to say: sky, dooryard, _______,
when summer arrived there was more, but not much
nothing really worth noting
and then it was winter again--nothing had changed: sky, dooryard, ________, white,
frozen was the lake and the lagoon, some froze the ocean
(now you erase that) (you cross that out)
and so on and so forth . . .


Olena Kalytiak Davis is a first-generation Ukrainian American who was born and raised in Detroit, Michigan. Educated at Wayne State University, the University of Michigan Law School, and Vermont College, she is the author of three books of poetry. She currently works as a lawyer in Anchorage, Alaska.

Olena Kalyiak Davis is a first-generation Ukrainian-American who was born and raised in Detroit. Educated at Wayne State University, the University of Michigan Law School, and Vermont College, she is the author of three books of poetry, including And Her Soul Out of Nothing (University of Wisconsin Press 1997), which received the Brittingham Prize for Poetry. Davis's honors include a Pushcart Prize and the Rona Jaffe Foundation Writers' Award. She currently works as a lawyer in Anchorage, Alaska.
Loading...
or support indie stores by buying on