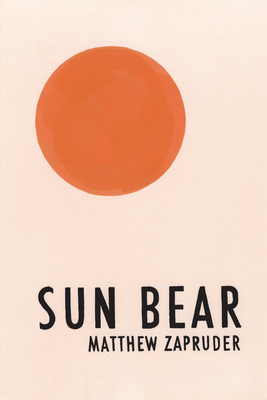 Matthew Zapruder has a razor eye for the remnants and revenants of modern culture.--The New York Times

With dynamic, logically complex sentences, Zapruder posits a world that is both extraordinary and refreshingly ordinary.--BOMB

Matthew Zapruder's poems begin in the faint inkling, in the bloom of thought, and then unfold into wide-reaching meditations on what it means to live in the contemporary moment, among plastic, statistics, and diet soda. Written in a direct, conversational style, the poems in Sun Bear display full-force why Zapruder is one of the most popular poets in America.

From I Drink Bronze Light:

Great American summer lakes
right now I am flying above you
through a rare cloudless transparent sky
back to the city where it is always
cold even in summer
the round hole I press my face against
shows only a blue expanse
with white sails below
speckled exactly the way
the Aegean would have been
three thousand years ago
if one could have seen it from above
maybe riding in the dark claw
of a god who didn't care. . . .


Matthew Zapruder is a poet, translator, and editor at Wave Books. He is the author of three collections of poetry, and his book The Pajamaist won the William Carlos Williams Award. His poems, essays, and translations have appeared in many publications, including BOMB, Harvard Review, Paris Review, the New Yorker, McSweeney's, and the Believer. He lives in San Francisco, California.

Matthew Zapruder lives in San Francisco and works as an editor at Wave Books. He holds degrees from Amherst College, UC Berkeley, and the University of Massachusetts and is the author of three collections of poetry: American Linden, Come on All You Ghosts, and The Pajamaist, which won the William Carlos Williams Award from the Poetry Society of America and was honored by Library Journal as one of the top ten poetry volumes of 2006. He is also co-translator of Secret Weapon, the final collection by the late Romanian poet Eugen Jebeleanu (Coffee House Press, 2007). The recipient of a 2011 Guggenheim Fellowship, Zapruder is a member of the permanent faculty at the low residency MFA in creative writing at UCR-Palm Desert as well as the Juniper Summer Writing Institute. His poems, essays and translations have appeared or are forthcoming in many publications, including Open City, Bomb, Harvard Review, Paris Review, The New Republic, The Boston Review, The New Yorker, McSweeney's, The Believer and The Los Angeles Times.
Loading...
or support indie stores by buying on