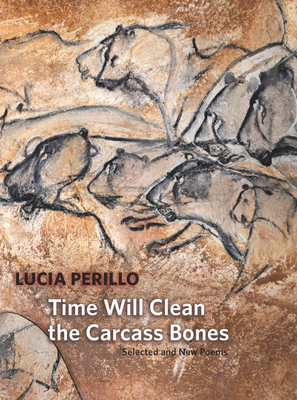 Time Will Clean the Carcass Bones

Perillo's poetic persona is funny, tough, bold, smart, and righteous. A spellbinding storyteller and a poet who makes the demands of the form seem as natural as a handshake.--Booklist

For a poet obsessed with the steady degradation of the body and looming of death, Lucia Perillo manages to be highly entertaining.... Humor is actually the key to the power of her poems.--The Los Angeles Times

"Lucia Perillo's Time Will Clean the Carcass Bones: New and Selected Poems is a significant retrospective that includes work from her six previous books... Fans will recognize her signature style--accessible, attuned to the small dramas in people's lives, and at times witheringly funny. They will also find familiar themes: the delights of nature, the frailty of the physical world and the many ways the human body lets people down. The book shows Perillo's ability to balance the timely and the timeless, and to capture some of the struggles that all humans face, regardless of when or where they live."--Washington Post

"Perillo writes skillfully of urban, suburban, and wild environments, but she's nearly unparalleled when addressing the 'meat cage, ' and its pain and mortality. Perillo's poems move against the backdrop of her own struggle with multiple sclerosis: 'If I sleep on my belly, pinning it down, / my breasts start puling like baby pigs/ trapped under their slab of torpid mother.' Yet these vivacious poems reveal humor, sexuality, and a sharp sense of images and turns of phrase.... a] marvelous collection."--Publishers Weekly, starred review

"Lucia Perillo writes poignant, smart, very engaging poems.... She has a vast storehouse of sometimes arcane knowledge to call upon, and that her palpable knowledge of the mortality of all things gives her work a primal power. S]he has a fine sense of humor, sometimes deliciously caustic and sometimes delightfully silly.... What a welcome publication "--Open Books: A Poem Emporium

MacArthur Genius Award winner Lucia Perillo is a fearless poet who, with characteristic humor and incisive irony, confronts the failings and wonder of nature, particularly the frail and resilient human body. This generous collection draws upon five previous volumes, including books selected as a New York Times 100 Notable Books of the Year and as a finalist for the Pulitzer Prize.

From Again, the Body:

When you spend many hours alone in a room

you have more than the usual chances to disgust yourself--

this is the problem of the body, not that it is mortal

but that it is mortifying. When we were young they taught us

do not touch it, but who can keep from touching it,

from scratching off the juicy scab?...

Lucia Perillo graduated from McGill University in Montreal with a major in wildlife management, and subsequently worked for the US Fish and Wildlife Service. She completed her MA in English at Syracuse University, and has published eight books of poetry, fiction, and nonfiction. She was a MacArthur Fellow and a finalist for the Pulitzer Prize. She lives in Olympia, Washington.

Lucia Perillo: Lucia Perillo graduated from McGill University in Montreal in 1979 with a major in wildlife management, and subsequently worked for the US Fish and Wildlife Service. She completed her MA in English at Syracuse University, and has published five books of poetry. She was a MacArthur Fellow in 2000 and finalist for the Pulitzer Prize in 2009. She lives in Olympia, Washington.
Loading...
or support indie stores by buying on