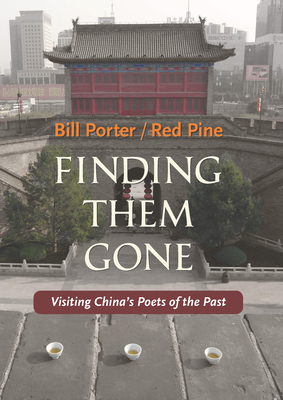 Visiting China's Poets of the Past

"A travel writer with a cult following."--The New York Times

"There are very few westerners who could successfully cover so much territory in China, but Porter pulls it off. Finding Them Gone uniquely draws upon his parallel careers as a translator and a travel writer in ways that his previous books have not. A lifetime devoted to understanding Chinese culture and spirituality blossoms within its pages to create something truly rare."--The Los Angeles Book Review

"A road trip with poetry--if that sounds like your kind of thing, then this is the book for you."--That's China Magazine

Combining travelogue, translations, history, and personal stories, this intimate and fast-paced tour of modern China celebrates inspirational landscapes and presents translations of classical poems, many of which have never before been translated into English.

Porter is a former radio commentator based in Hong Kong who specialized in travelogues. As such, he is an entertaining storyteller who is deeply knowledgeable about Chinese culture, both ancient and modern, who brings readers into the journey--from standing at the edge of the trash pit that used to be Tu Mu's grave to sitting in Han Shan's cave where the Buddhist hermit "Butterfly Woman" serves him tea.

Illustrated with over one hundred photographs and two hundred poems, Finding Them Gone combines the love of travel with an irrepressible exuberance for poetry. As Porter writes: "The graves of the poets I'd been visiting were so different. Some were simple, some palatial, some had been plowed under by farmers, and others had been reduced to trash pits. Their poems, though, had survived... Poetry is transcendent. We carry it in our hearts and find it there when we have forgotten everything else."

In praise of Bill Porter/Red Pine:

"In the travel writing that has made him so popular in China, Porter's tone is not reverential but explanatory, and filled with luminous asides... His goal is to tell interested foreigners about revealing byways of Chinese culture."--New York Review of Books

"Porter is an amiable and knowledgeable guide. The daily entries themselves fit squarely in the travelogue genre, seamlessly combining the details of his routes and encounters with the poets' biographies, Chinese histories, and a generous helping of the poetry itself. Porter's knowledge of the subject and his curation of the poems make this book well worth reading for travelers and poetry readers alike. It's like a survey course in Chinese poetry--but one in which the readings are excellent, the professor doesn't take himself too seriously, and the field trips involve sharing Stagg bourbon with the deceased."--Publishers Weekly

"Red Pine's out-of-the-mainstream work is canny and clearheaded, and it has immeasurably enhanced Zen/Taoist literature and practice."--Kyoto Journal

"Bill Porter has been one of the most prolific translators of Chinese texts, while also developing into a travel writer with a cult following."--The New York Times

"Red Pine's succinct and informative notes for each poem are core samples of the cultural, political, and literary history of China." --Asian Reporter

Bill Porter (a.k.a. "Red Pine") is widely recognized as one of the world's finest translators of Chinese religious and poetic texts. His best-selling books include Lao-tzu's Taoteching and The Collected Songs of Cold Mountain. He lives near Seattle.

Red Pine: Bill Porter assumes the pen name Red Pine for his translation work. He was born in Los Angeles in 1943, grew up in the Idaho Panhandle, served a tour of duty in the U.S. Army, graduated from the University of California with a degree in anthropology, and attended graduate school at Columbia University. Uninspired by the prospect of an academic career, he dropped out of Columbia and moved to a Buddhist monastery in Taiwan. After four years with the monks and nuns, he struck out on his own and eventually found work at English-language radio stations in Taiwan and Hong Kong, where he interviewed local dignitaries and produced more than a thousand programs about his travels in China. Red Pine's published translations include The Collected Songs of Cold Mountain, for which he was awarded the WESTAF Award in Translation; Poems of the Masters; In Such Hard Times, which recieved the 2010 Lucien Stryk Asian Translation Prize; The Poetry of Wei Ying-wu; Lao-tzu's Taoteching; The Zen Works of Stonehouse (Shih-wu); Guide to Capturing a Plum Blossom by Sung Po-jen, for which he was awarded a PEN West translation prize; and The Zen Teachings of Bodhidharma. He is also the author of Zen Baggage and Road to Heaven: Encounters with Chinese Hermits. He lives in Port Townsend, Washington.
or
Not Currently Available for Direct Purchase
Copyright © 2020 American Booksellers Association