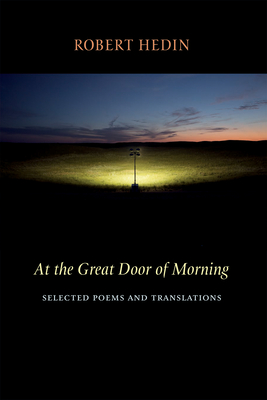 At the Great Door of Morning (Paperback)

"There isn't a flaw or misstep or a lack of humility on a single page. . . . I invite you to turn to just one page, to any page, and to let what's there wash over you with its beauty, its clarity, its precision, and its delicately balanced emotional weight." --Ted Kooser

"Robert Hedin is one of the quietest, most spiritually sensate poets of our time." --Olga Broumas

Unable to Write, I Decide to Move Out with the Finches

This morning I'm going to drag my desk
Out into the backyard and set it down
By the birdbath, near the flowerbed
Overgrown with weeds. And the black
Leather armchair where I like to read
I'll lug out under the two young maples,
Along with the Persian rug, the tall
Goose-necked lamp, the books, the CDs,
Even the huge unruly fern in the corner.
I'm going to haul it all outside, out
Into the open air where it's quiet,
Where I won't be bothered . . .

Robert Hedin is the Founding Director of the Anderson Center for the Arts, and author of eight books of poetry and several translations from the Norwegian. He lives in Red Wing, Minnesota.

Robert Hedin: Robert Hedin is the Founding Director of the Anderson Center for the Arts, and is the author of eight books of poetry and several translations from the Norwegian. He has taught at Pitzer College Writer's Conference, Duke University Writers' Conference, Eastern Kentucky Writers' Conference. His poems and translations have been published in American Poetry Review, Gettysburg Review, Kenyon Review, and Poetry. He lives in Red Wing, Minnesota.
or support indie stores by buying on
Copyright © 2020 American Booksellers Association