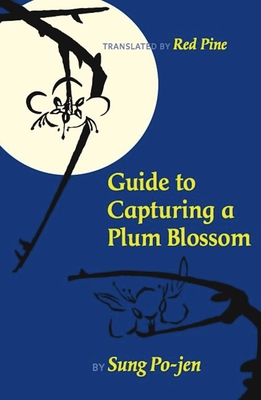 "It is one of the very first art books which helped artists develop the aptitude for seeing the inner essence of various natural phenomena."--Shambhala Sun

"Guide to Capturing a Plum Blossom could fit neatly into any number of contemporary-sounding categories: hybrid text, art book, lyric essay, etc. It is a book that relies on interdependence of image and text, of history and the present, of evocation and concrete image."--The Rumpus

"Red Pine introduces Western readers to both the text itself and the traditions it has inherited."--Virginia Quarterly Review

"All lovers of Asian poetry, mysterious history, divine drawing, and plum blossoms will enjoy this book. Thank you once again, Red Pine, for deep translation."--Michael McClure

Through a series of brief four-lined poems and illustrations, Sung Po-jen aims at training artistic perception: how to truly see a plum blossom. First published in AD 1238, Guide to Capturing a Plum Blossom is considered the world's earliest-known printed art books. This bilingual edition contains the one hundred woodblock prints from the 1238 edition, calligraphic Chinese poems, and Red Pine's graceful translations and illuminating commentaries.

Red Pine's commentary: "The Chinese liken the north wind that blows down from Siberia in winter to a roaring tiger. China is home to both the Siberian and the South China tigers. While both are on the verge of extinction, the small South China tiger still appears as far north as the Chungnan Mountains, where hermits have shown me their tracks."

Sung Po-jen was a Chinese poet of the thirteenth century.

Red Pine (a.k.a. Bill Porter) is one of the world's foremost translators of Chinese poetry and religious texts. His published translations include The Collected Songs of Cold Mountain, Lao-tzu's Taoteching, and Poems of the Masters. He lives near Seattle, Washington.

Sung Po-jen: Sung Po-jen was Chinese poet of the thirteenth century.Lo Ch'ing: Lo Ch'ing was the Executive Secretary of Chinese PEN and an advisor to Taiwan's Ministry of Culture. Red Pine: Red Pine (aka Bill Porter) is one of the world's foremost translators of Chinese poetry and religious texts. He was born in Los Angeles in 1943, grew up in the Idaho Panhandle, served a tour of duty in the U.S. Army, graduated from the University of California with a degree in anthropology, and attended graduate school at Columbia University. Uninspired by the prospect of an academic career, he dropped out of Columbia and moved to a Buddhist monastery in Taiwan. After four years with the monks and nuns, he struck out on his own and eventually found work at English-language radio stations in Taiwan and Hong Kong, where he interviewed local dignitaries and produced more than a thousand programs about his travels in China. Red Pine's published translations include The Collected Songs of Cold Mountain, for which he was awarded the WESTAF Award in Translation; Poems of the Masters; In Such Hard Times: The Poetry of Wei Ying-wu, which recieved the 2010 Lucien Stryk Asian Translation Prize; Lao-tzu's Taoteching; The Zen Works of Stonehouse ; Guide to Capturing a Plum Blossom by Sung Po-jen, for which he was awarded a PEN West translation prize; and The Zen Teachings of Bodhidharma. He is also the author of Zen Baggage and Road to Heaven: Encounters with Chinese Hermits. He lives in Port Townsend, Washington.
Loading...
or support indie stores by buying on