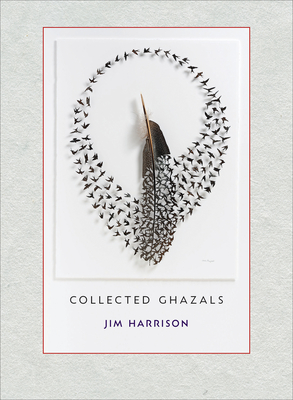 "This collection arrives from the spirit world buoyant, its rowdy soul intact."-- Ra l Ni o, Booklist The ghazal, a poetic form rooted in seventh century Arabia, became popular in the United States through the translations of Rumi, Hafiz, and Ghalib. As a young poet, Jim Harrison became enamored with ghazals, and while he ignored most of the formal rules, within the energized couplets he discovered a welcome vehicle for his driving passions, muscular genius, and wrecking-ball rages. The year Outlyer & Ghazals appeared, The New York Times honored the book with inclusion on their coveted "Noteworthy Titles" list, provocatively noting that these poems were "worth loving, hating, and fighting over." Collected Ghazals gathers all of Harrisons's published ghazals into a single volume, accompanied by an "Afterword" by poet and noted ghazal writer Denver Butson, who writes that with this collection, Harrison's ghazals "are ours to witness again in all their messy, brave, honest, grieving, lustful, longing humanity."

"These are raucous, boozy, at times sexually explicit journeys beyond standard forms, often expressing a young poet's exuberance. Harrison wills us to follow him: 'When I slept in the woods I awoke before dawn / and drank brandy and listened to the birds until the moon / disappeared.' Closing with an illuminating afterword by poet Denver Butson, this collection arrives from the spirit world buoyant, its rowdy soul intact."--Booklist

Jim Harrison (1937-2016) was one of America's most celebrated writers, publishing nearly forty books across multiple genres--fiction, essay and memoir--and he also wrote screenplays and popular food columns for Esquire and Brick. He is credited for revitalizing the novella form with the publication of his best-selling trilogy Legends of the Fall. In 2007 he was elected to the Academy of Arts and Letters. Harrison died at his writing desk in 2016, only a few months after the publication of his final book of poems, Dead Man's Float.
Loading...
or support indie stores by buying on