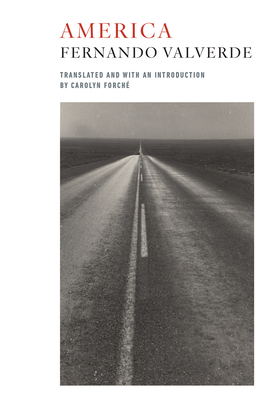 "Valverde's sharp meditation on the state of mind of a nation reeling from its historical contradictions and moral failings is startling...Forch 's consummate translation and instructive introduction provide a
map to help readers navigate this powerful book."--Booklist In Fernando Valverde's Am rica, "sorrow is ancient." Mournfully lyrical, politically sharp, with a sweeping view of American roots, dysfunctions, and ideals--as if from above, and yet also from within--this is a book that deconstructs the legacy of empire. From the Mississippi River to Fulton Avenue, from slavery to "lone wolf" shooters, Valverde grieves but does not wince away from all that is lost to greed and a culture of violence, painting an urgent portrait of "the thirst of America / a smile satisfied to death." Valverde is widely regarded as one of the most important younger Spanish-language poets. Here his vibrant voice and convictions are translated and introduced by Carolyn Forch , herself a world-renowned poet of witness. Bilingual, with Spanish originals and English translations.

Fernando Valverde is a preeminent poet writing in the Spanish language today, and he has received international acclaim for his contributions to the art of poetry. Born in Granada, Spain, Valverde has been awarded some of the most prestigious awards for Spanish poetry, and his books have been published across Europe and the Americas. In 2014 his book The Insistence of Harm received the Book of the Year award from the Latino American Writers Institute of the City University of New York. Valverde was also nominated for a Latin Grammy for work integrating poetry and flamenco. In addition to his artistic success, he directs the International Festival of Poetry in Granada, which has received hundreds of distinguished poets since its inauguration. Valverde is a distinguished visiting professor at the University of Virginia.
Loading...
or support indie stores by buying on