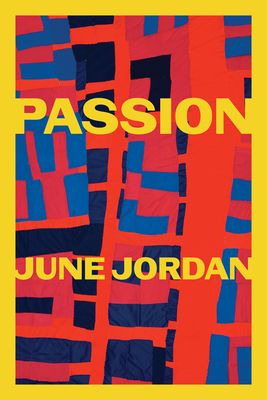 After decades out of print, Passion--one of June Jordan's most important collections--has returned to readers. Originally entitled, passion: new poems, 1977-1980, this volume holds key works including "Poem About My Rights," "Poem About Police Violence," "Free Flight," and an essay by the poet, "For the Sake of the People's Poetry: Walt Whitman and the Rest of Us." June Jordan was a fierce advocate for the safety and humanity of women and Black people, and for the freedom of all people--and Barack Obama made a line from this book famous: "We are the ones we have been waiting for." With love and humor, via lyrics and rants, she calls for nothing less than radical compassion. This new edition includes a foreword by Nicole Sealey.

Born in Harlem, New York, in 1936, June Jordan was a leading literary and activist voice of the civil rights, feminist, and LGBTQ liberation movements of the twentieth century. In addition to ten books of poetry, Jordan published several children's books, essay collections, and plays. Nicole Sealey was born in St. Thomas, US Virgin Islands, and raised in Apopka, Florida. She earned an MLA in Africana studies from the University of South Florida and an MFA in creative writing from New York University. Sealey is the author of the collections Ordinary Beast (2017), a finalist for the PEN Open Book and Hurston/Wright Legacy Awards, and The Animal After Whom Other Animals Are Named (2016), winner of the Drinking Gourd Chapbook Poetry Prize.
Loading...
or support indie stores by buying on