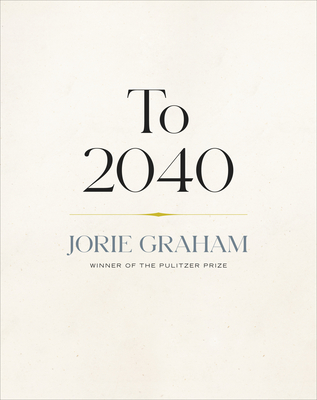 It is rare to find in one collection an entire skyline burning and the quiet to follow a single worm, to hear soil breathe--in Jorie Graham's fifteenth poetry collection, you do.Jorie Graham's fifteenth poetry collection, To 2040, opens in question punctuated as fact: "Are we / extinct yet. Who owns / the map." In these visionary new poems, Graham is part historian, part cartographer as she plots an apocalyptic world where rain must be translated, silence sings louder than speech, and wired birds parrot recordings of their extinct ancestors. In one poem, the speaker is warned by a clairvoyant "the American experiment will end in 2030." Graham shows us our potentially inevitable future soundtracked by sirens among industrial ruins, contemplating the loss of those who inhabited and named them. In sparse lines that move with cinematic precision, these poems pan from overhead views of reshaped shorelines to close-ups of a worm burrowing through earth. Here, we linger, climate crisis on hold, as Graham asks us to sit silently, to hear soil breathe. An urgent open letter to the future, with a habit of looking back, To 2040 is narrated by a speaker who reflects on her own mortality--in the glass window of a radiotherapy room, in the first "claw full of hair" placed gently on a green shower ledge. In poems that look to 2040 as both future and event-horizon, we leave the collection warned, infinitely wiser, and yet more attentively on edge. "Inhale. / Are you still there / the sun says to me." And, from the title poem, "what was yr message, what were u meant to / pass on?"

Jorie Graham was born in New York City, raised in Rome, and educated in France. Trilingual in English, Italian, and French, she studied philosophy at the Sorbonne in Paris before attending New York University to study filmmaking. She holds an MFA in poetry from the University of Iowa and is the author of fifteen collections of poetry. Her work has been widely translated and she is the recipient of multiple honors including a John D. and Catherine T. MacArthur Fellowship, the International Nonino Prize, and most notably the 1996 Pulitzer Prize for Poetry for The Dream of the Unified Field: Selected Poems. Currently, Graham is the Boylston Professor of Rhetoric and Oratory at Harvard University.
Loading...
or support indie stores by buying on