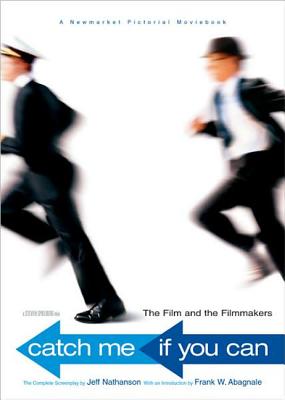 Catch Me If You Can (Hardcover)

The Film and the Filmmakers (Newmarket Pictorial Moviebook)

With more than 100 color photos, the companion book to the major DreamWorks film directed by Steven Spielberg and starring Leonardo Di Caprio and Tom Hanks.

Engaging in a game of cat and mouse in the real-life crime drama, Frank Abagnale, Jr. (Di Caprio) worked as a doctor, a lawyer, and as a co-pilot for a major airline-all before his 18th birthday. A master of deception, he was also a brilliant forger, whose skill gave him his first real claim to fame: At the age of 17, Frank Abagnale, Jr. became the most successful bank robber in the history of the United States. FBI Agent Carl Hanratty (Hanks) made it his prime mission to capture Frank and bring him to justice, but Frank was always one step ahead of him, baiting him to continue the chase.

With more than 100 color images, the companion book includes the complete script and behind-the-scenes photographs of this amazing true tale.

Steven Spielberg (Introduction)
The renowned director and producer of Schindler's List has also directed, among other acclaimed films, Lincoln, War Horse, Saving Private Ryan, E.T. the Extra-Terrestrial, Jurassic Park, Raiders of the Lost Ark, Close Encounters of the Third Kind, Amistad, and Jaws. He established the Shoah Foundation in 1994, inspired by his experience while filming Schindler's List.