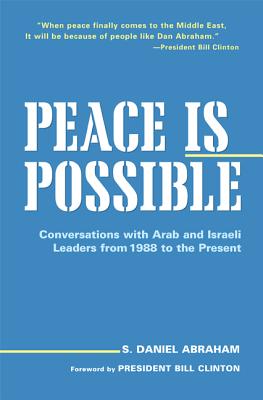 Conversations With Arab And Israeli Leaders from 1988 to the Present

Using his business experience with difficult negotiations, Abraham took an active behind-the-scenes role, setting up critical one-on-one meetings between key figures. He urged these leaders to articulate not what they wanted, but what they needed, to make peace, fostering significant advances in the peace process. Since Owens’ untimely death in 2002, Abraham has continued to arrange peacemaking meetings on his own.

Drawing from meeting transcripts, diary entries, and extensive handwritten notes, Abraham writes in the first person about these extraordinary, often private meetings, giving us rare “you are there” insight into historically significant events. In his pragmatic and hopeful book, he writes, “I am a great optimist, particularly about a region of the world that usually brings out people’s most pessimistic inclinations— Israel and its neighbors.”

S. Daniel Abraham, a leading American entrepreneur and pioneer in both the pharmaceutical and diet food business, is the creator of Slim-Fast Foods, the most successful diet product in history. A well-known philanthropist, his gift to the Mayo Clinic served to create the Dan Abraham Healthy Living Center. He is also the founder of the Center for Middle Peace and Economic Cooperation in Washington, D.C. A native of New York, he now lives in Palm Beach, Florida.