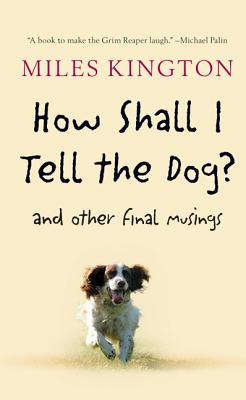 How Shall I Tell the Dog?

And Other Final Musings

“This is a wonderful and original memoir told through letters from British journalist Miles Kington to his agent. His letters, full of ideas for books and thoughts about life, are short and to the point and show his amazing ability to find humor in the darkest moments of life.”
— Selina Moraes, The Book Mark, Atlantic Beach, FL
View the List

In this hilarious and moving book, popular English humorist Miles Kington faces cancer and death with his sparkling trademark wit, musing on everything from board games and yodeling to the prospect of being outlived by his dog.

When some people are told they have only a few months to live, they might travel around the world or write their memoirs or put their affairs in order. When it happened at the age of 66 to Miles Kington-one of England's best-loved humorists-he did what he did best, offering sharp, wry, laugh-out-loud observations and ideas about his situation. Following his diagnosis of pancreatic cancer, Kington proposes crazier and crazier ideas for his next book (what he calls "cashing in on cancer") in a series of letters to his literary agent, Gill.

And what sort of things capture Kington's attention in his waning months? The sudden grimness of those 1,000 Places to See Before You Die books, for example. (What about 100 Things to Do Before You Die, Without Leaving Home?, he suggests. Instead of bungee jumping and whitewater rafting, learn to whistle with two fingers in your mouth, yodel, or steam open envelopes.) The irony that his dog, Berry, will probably outlive him, or the semi-outrageous idea of creating a funeral video:

The answer is quite simple.

Make a video in advance of my farewell speech, to be shown on a monitor, from the pulpit, or on a screen behind the stage, or wherever the best place would be.

I have already visualised the opening shot.

It is of me, smiling ruefully, and saying to camera: "Hello. I'm sorry I couldn't be here in person with you today."

Mischievous and utterly original, Miles Kington's words in the face of death are memorable and surprisingly uplifting.

Miles Kington was literary editor of Punch and a writer for the London Times. He also wrote a regular column for The Independent, from its earliest days until the week he died. The author of several bestsellers in the UK, he died of cancer in January 2008.