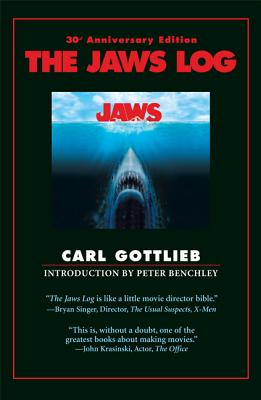 Winner of three Oscars(r) and the highest grossing film of its time, Jaws was a phenomenon, and this is the only book on how 26-year-old Steven Spielberg transformed Peter Benchley's #1 best-selling novel into the classic film it became.

Hired by Spielberg as a screenwriter to work with him on the set while the movie was being made, Carl Gottlieb, an actor and writer, was there throughout the production that starred Roy Scheider, Robert Shaw, and Richard Dreyfuss. After filming was over, with Spielberg's cooperation, Gottlieb chronicled the extraordinary year-long adventure in The Jaws Log, which was first published in 1975, generating 17 printings and selling more than 2 million copies. This new edition includes a photo section, a new introduction by Benchley, and a lengthy afterword by Gottlieb that updates the people and events involved in the film, ultimately providing a singular portrait of a famous movie and inspired moviemaking in process.

Carl Gottlieb has worked for more than 35 years in film and television as an actor, director, producer, screenwriter, teacher, and author, whose books include the bestseller "Long Time Gone: The Autobiography of David Crosby" (with David Crosby). In addition to the "Jaws" screenplay, which was nominated for a Golden Globe and a British Academy Award, he co-wrote "The Jerk," "Jaws 2," "Dr. Detroit," "Jaws 3D," "Which Way Is Up," and "Caveman," which he also directed. He received an Emmy(R) for his work on "The Smothers Brothers Comedy Hour."
Loading...
or
Not Currently Available for Direct Purchase