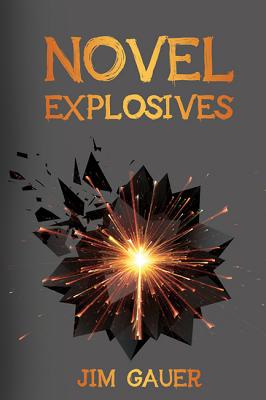 Ambitious, groundbreaking, and fiendishly funny, Novel Explosives travels down the mean streets of venture finance, money laundering, and the Ju rez drug wars on a torrent of linguistic virtuosity infused with a rarefied business I.Q. and mastery of everything from philosophy to pharmaceuticals, poetry to thermobaric weaponry. While an amnesiac, two gunmen, and a venture capitalist entangle and entwine in a do-or-die search for identity, at the palpitating heart of this novel, at its roiling fundamental core, lies an agonizing reappraisal of the way America behaves in the world, a project as worthy and urgent as it gets.

" Novel Explosives] is... fascinating... a pleasure... what my program Bookworm is for: to find books like this that are of enormous ambition and largely unknown to readers, and say, 'Hey get out there Order the book Try this out You haven't seen anything like this before '"
--Michael Silverblatt, Bookworm, 89.9 FM, KCRW, July 20, 2017

"Of all the books that we've promoted on this show, I think yours is the best, and deserves most the attention that it hasn't gotten.... I had a similar feeling of elation finishing this book as I did when I wrapped Infinite Jest and The Instructions by Adam Levin. The puzzle is so fun to solve. At the sentence level, this book is a blast to read."
--Matt Bucher and David Laird, The Great Concavity, Podcast, May 10, 2019

"An amazing novel, a literary masterpiece that reads like a thriller . . . the most fun reading I've had in ages."
--Steven Moore, author of The Novel: An Alternative History, January 2016

Jim Gauer is a mathematician, widely published poet, and possibly the world's only Marxist Venture Capitalist.

Jim Gauer is a mathematician, poet, and possibly the world's only Marxist Venture Capitalist.
or
Not Currently Available for Direct Purchase
Copyright © 2020 American Booksellers Association