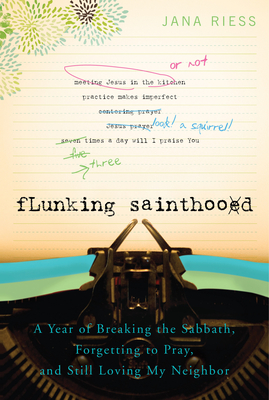 A Year of Breaking the Sabbath, Forgetting to Pray, and Still Loving My Neighbor

This wry memoir tackles twelve different spiritual practices in a quest to become more saintly, including fasting, fixed-hour prayer, the Jesus Prayer, gratitude, Sabbath-keeping, and generosity. Although Riess begins with great plans for success (“Really, how hard could that be?” she asks blithely at the start of her saint-making year), she finds to her growing humiliation that she is failing—not just at some of the practices, but at every single one. What emerges is a funny yet vulnerable story of the quest for spiritual perfection and the reality of spiritual failure, which turns out to be a valuable practice in and of itself.

" Flunking Sainthood is surprising and freeing; it is fun and funny; and it is full of wisdom. It is, in fact, the best book on the practices of the spiritual life that I have read in a long, long time."  - Lauren Winner, author of Girl Meets God and Mudhouse Sabbath

Jana Riess reminds us that saints are different from most of us: They are special, we are barely normal. They get it right, we rarely get it. They see God, we strain to see much of anything. And, Jana is no saint.  Rather than climbing to the pinnacle and sitting on a pedestal to tell us how it could be, Jana slides right next to us and reminds us that sainthood is overrated. With humor and insight she whispers to is that our lives matter just as they are. She prods us to never let our failures hold us back. She calls us to something greater than spiritual success - ordinary faithfulness.

Flunking Sainthood is the book I’m giving to my friends who are seeking to make sense of their emerging faith. - Doug Pagitt, author of A Christianity Worth Believing

“Jana Riess may have flunked at sainthood, but she's written a wonderful book. It's both reverent and irreverent, and it will make you want to become a better Christian -- or Jew, or Muslim, or Zoroastrian, or Jedi, or whatever you happen to be.” -  AJ Jacobs, author of The Year of Living Biblically

"Warm, light-hearted, and laugh-out-loud funny, Jana Riess may indeed have flunked sainthood, but this memoir assures us that she is utterly and deeply human, and that is something even more wonderful. Honest and sincere, she will endear you from page one."   -- Donna Freitas, author of The Possibilities of Sainthood

“With a helpfully hilarious account of her own grappling with godliness, Jana Riess proves to be a standup historian well-practiced in the art of oddly revivifying self-deprecation. She loves her guides, historical and contemporary, even as she finds them alternately impractical, harsh, or "infuriatingly jolly." The book is freaking wonderful—a candid and committed tale of prayers that resists supersizing and spirituality that has no home save the glory and the muck of the everyday.”--David Dark, author of The Sacredness of Questioning Everything

“Jana Riess's new book is a delight—fun, funny, engaging and a powerful reminder that the greatest work in our lives is not what we'll do for God but what God is doing in us.”   --Margaret Feinberg, www.margaretfeinberg.com, author of Scouting the Divine and Hungry for God

“Flunking Sainthood allows those of us who have attempted new spiritual practices-- and failed-- to breathe a great sigh of relief and to laugh out loud. Jana Reiss’s exposé of her year-long and less-than-successful attempts at eleven classic spiritual practices entertains and educates us with its honesty and down-to-earthiness. In spite of Jana’s paltry attempts at piety and her botched prayer makeovers, God showed up in the surprising, sneaky ways that only God does.

Jana is the kind of girlfriend I like to have--hilarious, smart, stubborn, irreverent, and totally gaga over God. She writes in the unfiltered, uncensored way I’d write if I had the skill and the guts (Oh sorry, Mom, I meant gumption, not guts.)” --Sybil MacBeth, author of Praying in Color


Praise For Flunking Sainthood: A Year of Breaking the Sabbath, Forgetting to Pray, and Still Loving My Neighbor…

It's clear from the start of this sparkling and very funny memoir that Riess means well. But as she readily admits, she's a spiritual failure. She intended to devote an entire year ("a year-long experiment") to mastering 12 different spiritual challenges, including praying at fixed times during the day, exhibiting gratitude, observing the Sabbath, practicing hospitality according to the rules set by St. Benedict, abstaining from eating meat, and amply demonstrating her generosity. But nothing turned out as planned. Rather than being moved by Therese of Lisieux's The Story of a Soul, she instead dismisses the saint as a "drama queen." And Reiss is unregenerately practical. The best month to fast, she reasons, is February, at the height of winter; conveniently, it's also the shortest month of the year. Furthermore, at best, she's a "lukewarm vegetarian." Although her spiritual quest falls far short, she can still proffer spiritual lessons. Anyone who has failed to live up to expectations, which means most everyone, will love this book.

STARRED REVIEW - Publishers Weekly - Punchy humor and unpretentious inquisitiveness combine in this absorbing memoir in which former PW editor Riess (What Would Buffy Do?) commits to both adopting and studying a new religious practice each month for a year, while simultaneously reflecting on her spiritual progress. Choosing such diverse disciplines as fasting “like a Muslim during Ramadan,” exploring lectio divina, observing an Orthodox Jewish Sabbath, practicing Benedictine hospitality, and engaging in the Liturgy of the Hours, the author shares frustrations and insights in a manner likely to amuse and comfort readers, especially those who have attempted such exercises and also found them challenging. For example, Riess’s description of her internal dialogue during Centering Prayer, concludes, “ ‘Shut the hell up!’ yells Spiritual Mind,” while her experience of practicing mindfulness, with annoying help from the never sainted Brother Lawrence, leads to a sympathetic observation that he’s “an underappreciated housewife.” Supporting quotes from saints and writers (St. John Chrysostom, Dorothy Day, Thornton Wilder) pepper the text. The author’s declared “failures” make her a sympathetic witness, while such “successes” as her description of how “[g]ratitude practically tackles me,” prove genuinely moving. A witty, inspiring read.(Nov.)

When I first encountered the title Flunking Sainthood: A year of breaking the sabbath, forgetting to pray, and still loving my neighbor, I thought, “That sounds like me in my stumbling efforts.” I sensed I would find a kindred spirit in author Jana Riess, and I read this memoir hungrily.
I enjoyed this book very much and could identify with the author’s longing to cultivate good habits and to deepen prayer life. I laughed aloud, and nodded my head in solidarity. I, too, have craved closeness with God, and tried many practices suggested by spiritual leaders. The chapter on praying the liturgy of the hours (or divine office) really struck home. I have been trying, unsuccessfully, to read morning psalms and then the compline prayer service at bedtime each day. Rather than feeling frustrated when I forget to do this, I enjoy the prayer time when it happens. After all, the quiet time is a gift to myself, and not an obligation in any way.
The chapter on Benedictine hospitality sent me straight to the library so that I could reread the Rule of Saint Benedict. How I long to be able to live the instruction that “all guests who present themselves are to be welcomed as Christ, for he himself will say: ‘I was a stranger and you welcomed me.'” As Jana Riess experienced, it is not easy in our fast-paced culture to slow down and enjoy our unexpected encounters with people.
While I read Flunking Sainthood in two eager sittings, I appreciated that the book could be picked up once a month, taking one chapter at a time and trying a spiritual discipline alongside Jana Riess. For this reason Flunking Sainthood would make an ideal read for the start of the new year, when many of us try to adopt positive habits. Perhaps you long to try lectio divina, centering prayer, or a deeper sabbath observance. With Flunking Sainthood, you can enjoy the companionship of Jana Riess as you experiment and journey.
The honesty and sincerity in the writing of Jana Riess provide encouragement, inspiration, and laughter. I am excited to see that Paraclete Press has published a useful companion volume, Flunking Sainthood Every Day: A daily devotional for the rest of us. —Lisa, Light to Read By

Since 2008, Jana Riess has been an editor in the publishing industry, primarily working in the areas of religion, history, popular culture, ethics, and biblical studies. From 1999 to 2008, she was the Religion Book Review Editor for Publishers Weekly, and continues to write freelance reviews for PW as well as other publications.

She holds degrees in religion from Wellesley College and Princeton Theological Seminary, and a Ph.D. in American religious history from Columbia University. She speaks often to media about issues pertaining to religion in America, and has been interviewed by the Associated Press, Time, Newsweek, People, the Boston Globe, USA Today, the Los Angeles Times, and Newsday, among other print publications, as well as “Voice of America,” the “Today” show, MSNBC, and NPR’s “All Things Considered,” “Tell Me More,” and “Talk of the Nation.”

She is the author or co-author of many books, including The Prayer Wheel; Flunking Sainthood; What Would Buffy Do?; Mormonism for Dummies; and The Writer’s Market Guide to Getting Published, andThe Next Mormons: The Rising Generation of Latter-day Saints. Her book The Twible: All the Chapters of the Bible in 140 Characters or Less . . . . Now with 68% More Humor! won first place in the non-fiction category in the Writer’s Digest Annual Self-Published Book Awards.

She is a senior columnist for Religion News Service.