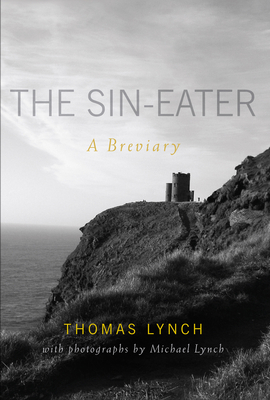 and downed swift gulps of beer and venial sin

then lit into the bread now leavened with

the corpse’s cardinal mischiefs, then he said

“Six pence, I’m sorry.” And the widow paid him.

So opens the unsanctioned priesthood of The Sin-eater: A Breviary—Thomas Lynch’s collection of two dozen, twenty-four line poems—a book of hours in the odd life and times of Argyle, the sin-eater. Celtic and druidic, scapegoat and outlier, a fixture in the funerary landscape of former centuries, Argyle’s doubt-ridden witness seems entirely relevant to our difficult times. His “loaf and bowl,” consumed over corpses, become the elements of sacrament and sacrilege. By turns worshipful and irreverent, good-humored and grim, these poems examine the deeper meanings of Eucharist and grace, forgiveness and faith, atonement and reconciliation. With photographs by Michael Lynch and cover art by Sean Lynch, the author’s sons.

Thomas Lynch’s poems, essays, and stories have appeared in The Atlantic, Poetry and The Paris Review. His book The Undertaking won the American Book Award, was a finalist for the National Book Award, and was made into an Emmy Award-winning PBS Frontline documentary. He lives in Michigan and in Moveen, County Clare, Ireland. Visit www.thomaslynch.com
Loading...
or support indie stores by buying on
(This book is on backorder)