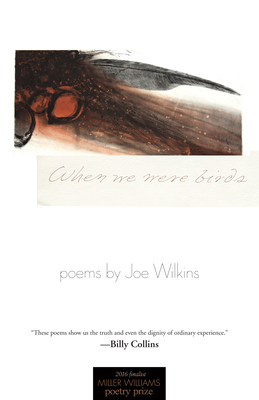 When We Were Birds (Paperback)

In When We Were Birds, Joe Wilkins wrests his attention away from the griefs, deprivations, and high prairies of his Montana childhood and turns toward “the bean-rusted fields & gutted factories of the Midwest,” toward ordinary injustice and everyday sadness, toward the imminent birth of his son and his own confusions in taking up the mantle of fatherhood, toward faith and grace, legacy and luck.

A panoply of voices are at play—the escaped convict, the late-night convenience store clerk, and the drowned child all have their say—and as this motley chorus rises and crests, we begin to understand something of what binds us and makes us human: while the world invariably breaks all our hearts, Wilkins insists that is the very “place / hope lives, in the breaking.”

Within a notable range of form, concern, and voice, the poems here never fail to sing. Whether praiseful or interrogating, When We Were Birds is a book of flight, light, and song. “When we were birds,” Wilkins begins, “we veered & wheeled, we flapped & looped— / it’s true, we flew.”

Joe Wilkins is the author of the memoir The Mountain and the Fathers and the poetry collections Notes from the Journey Westward and Killing the Murnion Dogs. A Pushcart Prize winner and National Magazine Award finalist, he lives in western Oregon and teaches writing at Linfield College.

Praise For When We Were Birds: Poems (Miller Williams Poetry Prize)…

“Full of imaginative novelty as well as reminders that miraculous secrets are hidden in the fabric of everyday life . . . these poems show us the truth and even the dignity of ordinary experience.”—Billy Collins

“This gritty collection from Joe Wilkins showcases how the outdoors can be a classroom for all matters of the heart: it sneaks devastating truths and disjunctions into soil and shattered rivers, into places where ‘a vole snouts / through my throat, where a tree frog’s scream / fills my heart’s dark riffle.’ When We Were Birds doesn’t just contemplate all ruin and hard work, where ‘the backs of my hands / had lustered clear to burlap or dry river mud,’ but also masterfully showcases a magnificent spill and glide of beautiful language even if the speaker begs, ‘O god/of busted wishes/ leave me here a long time here/ in the stinking dark.’”

“The most striking component of [Wilkins’s work] is its awareness of the whole world. What is ordinary becomes transcendent. In places derelict and seemingly unexceptional, Wilkins compels us to recognize what is worth salvage, worth praise.”
—Indiana Review

“Love—or something like it—is everywhere in Wilkins’ lines, a bright-eyed beast in its own right, marred and unpredictable, dragging barbed wire and dead fish and slim-hipped girls and the brokenness of the world. It is irresistible. It calls to us. It reminds us there is nothing for us to do but tear into these words like the hungry dogs we are and find ourselves filled.”