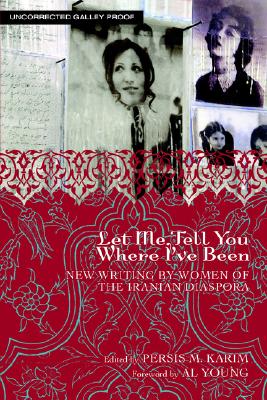 Let Me Tell You Where I've Been

New Writing by Women of the Iranian Diaspora

Until recently, Iranian literature has overwhelmingly been the domain of men. But the new hybrid culture of diaspora Iranians has produced a prolific literature by women that reflects a unique perspective and voice. Let Me Tell You Where I've Been is an extensive collection of poetry, fiction, and nonfiction by women whose lives have been shaped and influenced by Iran's recent history, exile, immigration and the formation of new cultural identities in the United States and Europe. These writings represent an emerging and multi-cultural female sensibility. Unlike many flat media portrayals of Iranian women—as veiled, silenced—these writers offer a complex literary view of Iranian culture and its influences. These writers interrogate, challenge, and re-define notions of home and language and their work offers readers an experience of Iranian diaspora culture. Featuring over one hundred selections (two-thirds of which have never been published before) by more than fifty contributors--including such well-known writers as Gelareh Asayesh, Tara Bahrampour, Firoozeh Dumas, Roya Hakakian and Mimi Khalvati--the collection represents a substantial diversity of voices in this multicultural community. Divided into six sections, the book's themes of exile, family, culture resistance, and love, create a rich and textured view of the Iranian diaspora. The poems, short stories, and essays are suggestive of an important conversation about Iran, Iranian culture, the Persian and English languages, and the dual identities of many of its authors. This powerful collection is a tribute to the wisdom, insight, and sensitivity of women attempting to invent and articulate a literature of in-betweenness.

Praise For Let Me Tell You Where I've Been: New Writing by Women of the Iranian Diaspora…

“I’d never heard of Sholeh Wolpe or the late Susan Atefat-Peckham before this book; now I want to read everything they’ve ever written. Their poems are daring and wise, full of love, breathtakingly tender and hones. Do they write with a woman’s sensitivity? Absolutely. Do I feel as though I’m reading ‘woman’s literature’? Absoutely not. It’s deeper than that – both arresting and sublime in a way that transcends gender.” — Brad Buckholz, Austin American-Statesman “This is a surprising collection. . . . Persis Karim has located a community of sensitive and articulate cultural observers and mapped that explosion of creativity for us.” — Michael Beard, coeditor of Middle Eastern Literatures and author of Naguib Mahfouz: From Regional Fame to Global Recognition “[These writings] command our attention, not only for the range of their subject matter and literary artistry, but for representing a multiplicity of voices, the newest patch in this quilt of American culture. They are allegories of our enriched nation . . . the real thing.” — Zohreh T. Sullivan, author of Exiled Memories: Stories of Iranian Diaspora “In these tender and no-so-tender pages you’ll find the barely tellable story of what really happened to dreams deferred. Through vivid, sometimes spellbinding accounts they provide, these gifted writers speak powerfully to the subject of displacement.” — Al Young, from the Foreword “We have to thank Persis Karim for this wonderful book and for these powerful selections; they offer an alternative to the currently politicized and one-sided view of Iran and Iranian culture.” – Azar Nafisi, author of Reading Lolita in Tehran: A Memoir in Books "Might we present this stunning collection of voices to the U.S. government? Might this be the perfect moment for bridges of language and sensibility—delicious humanity—to define and connect us? Cast aside the grim proclamations of power and threat! Gratitude to Persis Karim for this healing tonic of pomegranate wisdom and pleasure." —Naomi Shihab Nye, poet and author of You & Yours, 19 Varieties of Gazelle: Poems of the Middle East "Iran is a land of paradoxes. It is also undergoing a momentous and profound transformation. The delightfully diverse group of women assembled in this important and timely anthology offers a panoramic view of this complexity and dynamism. Persis Karim ought to be congratulated." —Farzaneh Milani, director of Studies in Women and Gender at the University of Virginia, is the author of Veils and Words: The Emerging Voices of Iranian Women Writers

Persis M. Karim was born and raised in the San Francisco Bay Area by her Iranian father and French mother. She is an associate professor of English and Comparative Literature at San Jose State University. She has written numerous articles about Iranian-American literature and is coeditor and contributing author to A World Between: Poems, Short Stories and Essays by Iranian-Americans.
Loading...
or
Not Currently Available for Direct Purchase