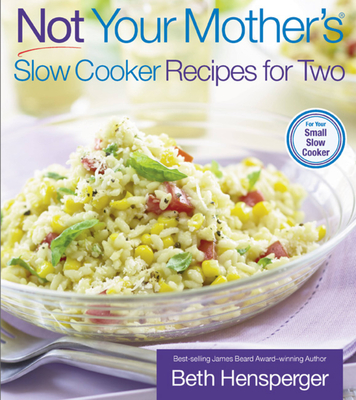 Not Your Mother's Slow Cooker Recipes for Two

Nearly 60 percent of American households today consist of only one or two people, yet most cookbooks don't reflect this trend, with recipes designed for large families, yielding 6–8 servings. For individuals and small families who want to cook hearty, healthful meals but don't want to deal with all the leftovers, Beth Hensperger has the solution with Not Your Mother's® Slow Cooker Recipes for Two.

As always, Hensperger's innovative recipes call for fresh, healthful ingredients and continue to prove that the slow cooker can produce amazing meals. While the recipes yield the perfect amount for two or three people, there is no shortage of flavor with dishes such as:The slow cooker is an essential countertop appliance for busy cooks, and this is the only book on the market specifically written for the increasingly popular 1 ½–3 ½-quart slow cooker. Not Your Mother's® Slow Cooker Recipes for Two is great for the growing population of empty-nesters, working couples, singles, and small families who want the convenience of small slow-cooker cooking without sacrificing wholesomeness and flavor.

Beth Hensperger, a New Jersey native who has lived in California since her teens, has been educating, writing, and demo-lecturing about the art of baking for over 30 years. In the last few years, she has shifted focus to countertop appliance-driven cookbooks that embrace adapting traditional and professional recipes for the home cook: the bread machine, the rice cooker, the microwave, and a four-volume compilation specifically for use with the electric slow cooker, stressing personal creativity in preparation and selection of ingredients. Hensperger is the author of over 22 cookbooks, including the best-selling Not Your Mother's series, which includes: Not Your Mother's Slow Cooker Recipes for Two,Not Your Mother's Microwave Cookbook, Not Your Mother's Fondue, Not Your Mother's Casseroles Revised and Expanded Edition, and Not Your Mother's Make-Ahead and Freeze Cookbook Revised and Expanded Edition, along with the blockbuster first volume, Not Your Mother's Slow Cooker Cookbook. Her other books include highly-acclaimed titles such as The Bread Lover's Bread Machine Cookbook and The Ultimate Rice Cooker Cookbook. She is also the author of The Bread Bible (Chronicle Books), winner of a James Beard Award in 2000. She has twice been nominated for the Julia Child/IACP Cookbook Award. Hensperger wrote a San Jose Mercury News food column for twelve years, Baking with the Seasons. She is a contributor to dozens of national and online cooking & lifestyle magazines, such as Food & Wine, Every Day with Rachael Ray magazine, Veggie Life, Cooking Light, Working Woman, Victoria, Prevention, and Family Circle, and is a sought after newspaper and radio interviewee speaking on slow cooking, bread baking, and entertaining. She lives in the San Francisco Bay area. Visit her website at bethhensperger.com and blog at notyourmotherscookbook.com.