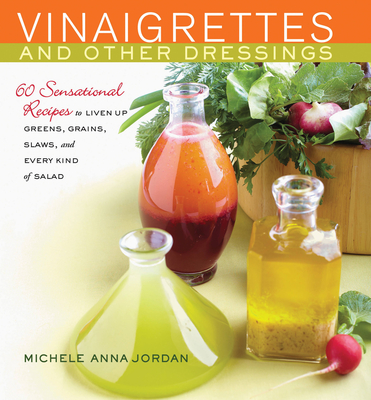 Vinaigrettes and Other Dressings (Hardcover)

60 Sensational recipes to Liven Up Greens, Grains, Slaws, and Every Kind of Salad

With this gorgeous and inventive book full of fresh, bright dressings and vibrant vinaigrettes, you can make salads the stars of your meals, rather than just afterthoughts. You can even make salads that are complete one-plate meals, easy to prepare and full of flavor.

Mollie Katzen, author of the Moosewood cookbooks, calls lifelong Californian Michele Anna Jordan "the quintessential expert on California cuisine"--and nowhere on earth are salads more celebrated than in California. Michele has been perfecting her salad-making craft over several decades as a chef, caterer, food columnist, and cookbook author. In Vinaigrettes and Other Dressings, she shares her wisdom about the most important element in any salad: its dressing. About half of the recipes in this book are variations on the classic vinegar-and-olive-oil vinaigrette. But Michele takes the vinaigrette formula in surprising and delicious directions, sometimes by using flavored vinegars (either store-bought or flavored by the home cook), sometimes by using dark vs. light or mild vs. strong olive oils, sometimes by switching out the olive oil for another oil, and always by adding flavoring elements like berries, citrus, honey, bacon, nuts, mustard and even wines and sherries.

The remaining recipes include: milk- or cream-based dressings, dressings that start with a base of finely pureed fruits or vegetables, and dressings that feature a distinctively flavored oil, such as walnut oil or hazelnut oil. While the emphasis is on dressings for green salads and which greens pair best with each dressing, there are ample ideas for other uses, such as green bean, potato, and other veggie salads, as well as fruit salads and dinner salads that include meats or fish. The recipes are accompanied by luscious color photographs, and there are plenty of tips for making perfect-every-time salads and for crafting your own signature salads that you can make for years to come.

Michele Anna Jordan, a second-generation Californian who has lived in the San Francisco Bay Area her entire lif has twelve years of experience as an award-winning chef and has written a multitude of cookbooks. Currently, she writes three weekly columns for The Santa Rosa Press Democrat, Savuer magazine, which recently took a first place award from the Association of Food and Wine Journalists. Jordan has held positions as restaurant critic for San Francisco Focus Magazine, as well as the San Francisco Chronicle, and has written for numerous national publications, including: Cooking Light, Wine Enthusiast, Kitchen Garden, Fine Cooking, Bon Appetit, Food & Wine, Asian Week, Appellation, Sky, Wine & Spirits, and the Electronic Gourmet Guide. In addition to cooking and writing, Jordan teaches and lectures on a variety of food-related topics and is a frequent guest on radio and television around the country Jordan lives in western Sonoma County with her two black cats, Poe and Rosemary.