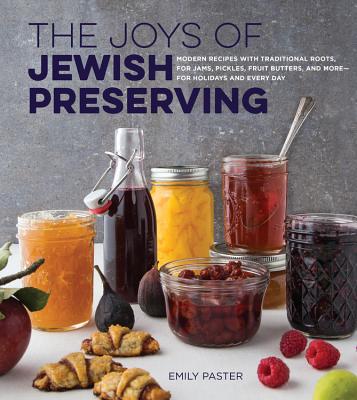 The Joys of Jewish Preserving

Modern Recipes with Traditional Roots, for Jams, Pickles, Fruit Butters, and More--for Holidays and Every Day

Jewish cooking is loaded with delicious fares that are steeped in history and culture. Experience a wide variety of savory foods, preserves, holiday dishes and more with The Joys of Jewish Preserving.

Jewish cooks, even casual ones, are proud of the history of preserved foods in Jewish life, from the time of living in a desert two millennia ago, to the era in which Jews lived in European ghettoes with no refrigeration during the last century. In a significant sense, the Jewish tradition of preserved foods is a symbol of the Jewish will to survive.

About 35 of the 75 recipes in The Joys of Jewish Preserving are for fruit jams and preserves, from Queen Esther's Apricot-Poppyseed Jam or Slow Cooker Peach Levkar to Quince Paste, Pear Butter, and Dried Fig, Apple, and Raisin Jam.

About 30 are for pickles and other savory preserves, including Shakshuka, Pickled Carrots Two Ways, and Lacto-Fermented Kosher Dills. The remaining 10 recipes bear the tag "Use Your Preserves," and these cover some of the ways that preserves are used in holiday preparations, like Sephardic Date Charoset, Rugelach, or Hamantaschen.

Many recipes are the author's own creations and have never appeared before in print or online. With terrific color photos by the Seattle photographer Leigh Olson, rich and detailed background info about Jewish food traditions, and, above all, with terrific and tasty recipes both sweet and savory, this book is a celebration of some of the best foods Jewish cooks have ever created.


Praise For The Joys of Jewish Preserving: Modern Recipes with Traditional Roots, for Jams, Pickles, Fruit Butters, and More--for Holidays and Every Day…

"The Joys of Jewish Preserving is the most exciting resource in my pantry! Because pickles and jams were such an important part of my early food memories, I cannot wait to update them in my professional kitchen and my home cupboard with the help of Emily Paster’s incredible book." - Michael Solomonov, co-owner and chef, Zahav (Philadelphia), and author of Zahav: A World of Israeli

"The Joys of Jewish Preserving is a buoyant and useful exploration of the Jewish preserving tradition that manages to be both modern and rooted in age-old culture. It should be a mandatory addition to anyone’s collection of books on preserving." - Marisa McClellan, author of Food in Jars

"Emily Paster taps into the bright, briny, and full-flavored potential of old-world food preservation, while expanding our understanding of what it means to ‘eat Jewish.'" - Leah Koenig, author of Modern Jewish Cooking

"Emily Paster’s The Joys of Jewish Preserving is a jewel of a book.  Clearly and appetizingly she tells the tales of pickles and preserves, both sweet and savory, from pomegranate paste to prune lekvah." - Joan Nathan, author of Jewish Cooking in America and King Solomon's Table

"Emily Paster serves up a delicious collection of recipes whose flavors and stories are rich in heritage and culture. Her recipes preserve an important tradition and show how that tradition is alive and evolving today." - Jenn Louis, chef/owner, Lincoln (Portland, Oregon), and author of Pasta by Hand

"This is the book I have dreamed of for years! Emily Paster has flung open the larder of traditional and innovative multicultural Jewish pickles and preserves. Only a well-seasoned, well-traveled balabusta like Paster could have delivered this book. It will engage, enrich, and nourish anyone with an interest in home preservation and Middle Eastern, North African, or Eastern European cooking." - Karen Solomon, author of Jam It, Pickle it, Cure It

"To survive for thousands of years, often on the move and often living in inhospitable places, the Jews had their religion, their rituals, and their foods - and all three required adaptation and preservation. Thank you, Emily Paster, for reminding us that to preserve a food is to preserve a tradition, a culture, and a people. Your book has been a joy to read and your recipes will be a joy to follow." - - Mark Russ Federman, Russ and Daughters, New York

Emily Paster was born and raised in Washington, DC, where her mother was the Director of the Folger Shakespeare Library and her father was chairman of the public relations firm Hill and Knowlton. A graduate of Princeton University and the University of Michigan Law School, she redirected her career from law to cooking and food writing beginning about 10 years ago, when she had her second child. She writes the widely admired blog West of the Loop, primarily about food but with forays into parenting and family life. She is the co-founder of the Chicago Food Swap and is a national leader in the growing food swap movement (community get-togethers where handmade foods are bartered and exchanged). Her previous book is Food Swap (Storey 2016). A resident of River Forest, Illinois, in suburban Chicago, she speaks often in the Chicago area on farm-to-table and garden-to-table provisioning and cooking and she has appeared numerous times on food and cooking segments for the major TV network affiliates in Chicago.