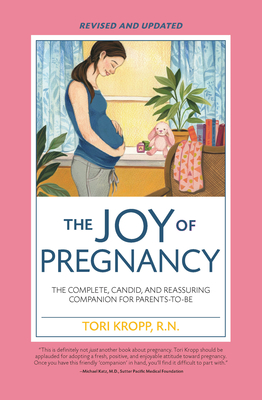 The Complete, Candid, and Reassuring Companion for Parents-to-Be

Tori Kropp, R.N., has delivered thousands of babies at the prestigious California Pacific Medical Center in San Francisco, where she has worked for two decades. The birth process has been a fascination of Tori’s since childhood, and even as an experienced nurse, she still considers pregnancy care to be more of a passion than a career. After studying anthropology and psychology as an undergraduate at Michigan State University, she earned her nursing degree from Manatee College in Florida. Tori chose to work in perinatal nursing because it allows her to have a hands-on role in childbirth. An active member of the health care community, Tori is a member of the Association of Women’s Health, Obstetric and Neonatal Nurses, and the California Nurses Association. In 1990, after observing that pregnant women were coming into the hospital more and more worried and anxious about labor, Tori founded a unique pre- and post-natal teaching program: PillowTalk, Modern Childbirth Education. Her strategy in these classes—teaching women not to overwhelm themselves with information and to focus instead on trusting their bodies and enjoying their pregnancies—was an instant success. In the mid 1990s, Tori used this same evenhanded, positive approach to pregnancy in founding Stork Site®, a community website for expectant and new parents. Bursting with activity, this site became one of the Internet’s first successful communities and later became a part of ivillage.com. Tori has been interviewed on national television and radio and in national print publications, including CNN, Good Morning America, The Wall Street Journal, New York Post, Washington Times, Atlanta Journal Constitution, and Chicago Sun-Times. She lives in Marin County, California, with her family. Her website is TheJoyOfPregnancy.com.