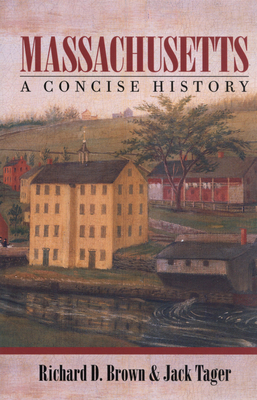 From the moment the first English colonists landed on the shores of Plymouth Bay, the experiences of the people of Massachusetts have been emblematic of larger themes in American history. The story of the first Pilgrim thanksgiving is commemorated as a national holiday, while the Boston Tea Party and Paul Revere's ride have passed into the national mythology. Even the grimmer aspects of the American experience—Indian warfare and the conquest of an ever expanding frontier—were part of the early history of Massachusetts. In this book, Richard D. Brown and Jack Tager survey the rich heritage of this distinctive, and distinctly American, place, showing how it has long exerted an influence disproportionate to its size. A seedbed of revolt against British colonial rule, Massachusetts has supplied the nation with a long line of political leaders—from Samuel and John Adams to William Lloyd Garrison and Lucy Stone to John, Robert, and Edward Kennedy. Its early textile mills helped shape the industrial revolution, while its experiences with urbanization, immigration, ethnic conflict, and labor strife reflected the growth of the national economy. In the twentieth century, the state continued to lead the country through a series of wrenching economic changes as it moved from the production of goods to the provision of services, eventually becoming a center of the high-tech revolution in telecommunications. If there is one common theme in the Bay State's history, Brown and Tager make clear, it is the capacity to adapt to change. In part this trait can be attributed to the state's unique blend of resources, including its many distinguished colleges and universities. But it can also be credited to the people themselves, who have created a singular sense of place by reconciling claims of tradition with the possibilities of innovation. This book tells their story.

Praise For Massachusetts: A Concise History…

"A welcome volume that will fill an important niche, since there is no general history of Massachusetts currently in print. It covers the history of the state nicely, combining broad historical generalization, often supported by good use of statistical and other hard data, with character sketches of significant figures from different eras of the state's history. The book will immediately become the standard history."—James O'Toole, Boston College