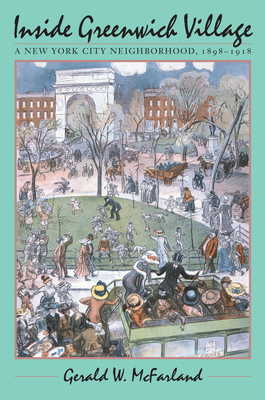 In the popular imagination, New York City's Greenwich Village has long been known as a center of bohemianism, home to avant-garde artists, political radicals, and other nonconformists who challenged the reigning orthodoxies of their time. Yet a century ago the Village was a much different kind of place: a mixed-class, multiethnic neighborhood teeming with the energy and social tensions of a rapidly changing America. Gerald W. McFarland reconstructs this world with vivid descriptions of the major groups that resided within its boundaries—the Italian immigrants and African Americans to the south, the Irish Americans to the west, the well-to-do Protestants to the north, and the New York University students, middle-class professionals, and artists and writers who lived in apartment buildings and boarding houses on or near Washington Square.

McFarland examines how these Villagers, so divided along class and ethnic lines, interacted with one another. He shows how clashing expectations about what constituted proper behavior in the neighborhood's public spaces—especially streets, parks, and saloons—often led to intergroup conflict, political rivalries, and campaigns by the more privileged Villagers to impose middle-class mores on their working-class neighbors. Occasionally, however, a crisis or common problem led residents to overlook their differences and cooperate across class and ethnic lines. Throughout the book, McFarland connects the evolution of Village life to the profound transformations taking place in American society at large during the same years.

Praise For Inside Greenwich Village: A New York City Neighborhood, 1898-1918…

"The deepest, most richly textured, and most nuanced picture of Greenwich Village ever written. Far from engaging in historical nostalgia for an idyllic lost community, McFarland reveals how, even a century ago, the Village was already a place that gained its identity from the roiling ethnic, political, and class tensions on its streets."—Daniel Czitrom, coauthor of Out of Many: A History of the American People

"An excellent book, one that provides a full and fascinating account of this New York City neighborhood during the Progressive era. . . . The book successfully integrates the development of the Village's ethnic and working-class communities with the institutional thrust of the elites and reformers. It makes for a complex history that gets well beyond the popular conception of Greenwich Village as little more than a hangout for bohemians and cultural radicals"—American Historical Review

"Creatively researched and beautifully crafted. . . . Reading McFarland's accessible prose is like being in the company of an assured and articulate tour guide as at home in Washington Square salons as he is familiar with cardboard-box factories and settlement houses."—New York History

"McFarland (history, Univ. of Massachusetts, Amherst; Mugwumps, Morals, and Politics) focuses on a period in which New York's Greenwich Village was a mixed-class, multiethnic urban neighborhood. At the end of the 19th century, where this book begins, Irish immigrants lived in the West Village. The owners of the saloons that dotted the streets became community leaders, and county societies, the Catholic Church, and the Tammany Hall organization fostered the community's cohesion. At the same time, an enclave called Little Africa made up one of the largest black communities in the city. Later, as African Americans departed to live uptown, Italians became the area's largest ethnic group. Meanwhile, by the turn of the last century, the area attracted colonies of college-educated youth seeking personal transformation and societal change. Influenced by Socialist ideals, they became settlement house activists and advocates for progressive reform. The relationships among the reformers, the working classes, and the elite Protestant society living north of Washington Square offer insights into American urban life. Included are the Triangle Shirtwaist fire and the movements for trade unions and women's rights. Written in clear, accessible prose, this book is a pleasure to read. Recommended to public and academic libraries."—Library Journal

"The narrow focus of this 20 years (the history of Greenwich Village has generally been divided into seven phases, this one often less emphasized) gives more of an insight into what Greenwich Village became than you might imagine."—Blue Ridge Business Journal

Gerald W. McFarland is professor of history at the University of Massachusetts Amherst. His books include A Scattered People: An American Family Moves West; The "Counterfeit" Man: The True Story of the Boorn-Colvin Murder Case; and Mugwumps, Morals, and Politics, 1880–1920. www.geraldwmcfarland.com
Loading...
or
Not Currently Available for Direct Purchase