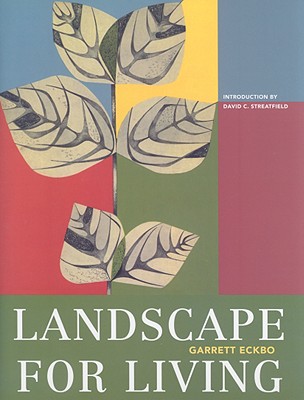 Garrett Eckbo (1910-1996) was one of the most highly respected and influential American modernist landscape architects. He worked assiduously to overthrow the Beaux-Arts system of landscape design and to develop an approach that would address the social and economic challenges of the modern world. Eckbo rejected the centrality of nature as a psychological and spiritual source of inspiration, criticizing the "palliative" introduction of nature into cities in parks designed by Olmsted and other nineteenth-century landscape architects and arguing instead for a scientific method that would provide a model for a new approach to landscape design entirely free of preconceptions. Deliberately experimental, Eckbo's designs were centered on the garden, which he believed was the prototype for all landscape design. His built work was influenced by modernist European architecture, modern art, and vernacular landscape traditions. Published in 1950, Landscape for Living presents a synthesis of Eckbo's thinking and professional work and sets forth his theoretical approach to achieving the "total landscape." Illustrations throughout the book feature his own designs for gardens, parks, and institutional projects, group housing from his graduate years, work for the Farm Security Administration, and projects by the firm of Eckbo, Royston and Williams. David C. Streatfield's introduction chronicles Eckbo's life to 1950, from his lonely childhood through his rebellious years at Harvard and well into his distinguished early career as a landscape designer, prolific author, and committed social activist, interpreting Eckbo's densely written text as a reflection of this history. Published in association with Library of American Landscape History: http: //lalh.org/

David C. Streatfield is professor emeritus of landscape architecture at the University of Washington and author of California Gardens: Creating a New Eden.
or
Not Currently Available for Direct Purchase
Copyright © 2020 American Booksellers Association