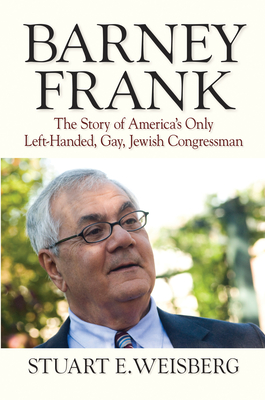 The Story of America's Only Left-Handed, Gay, Jewish Congressman

In a survey conducted by Washingtonian magazine, Barney Frank was rated the smartest, funniest, and most eloquent member of Congress. A mainstay in the House of Representatives since 1981, he has come to be known for his talent as a legislator, his zeal for verbal combat, his imposing intellect, and a quick wit that both disarms and entertains other lawmakers. Most recently, as chair of the Financial Services Committee, he was instrumental in crafting a compromise bill to stem the tide of home mortgage foreclosures, as well as the subsequent $700 billion "rescue plan."

Based on interviews with over 150 people, including more than thirty hours with Frank himself, this biography reconstructs for the first time his life and career, from his working-class childhood in Bayonne, New Jersey, to his years at Harvard and in Boston politics, through his rise to national prominence. Stuart Weisberg captures Frank in all his quirkiness, irreverence, and complexity. He also examines his less appealing side—his gruff exterior, his legendary impatience, his aversion to wasting time. Weisberg reveals the pressure Frank has felt as the most prominent openly gay politician in the United States, one whose career was nearly derailed by a highly publicized sex scandal involving a male prostitute.

Above all, this book shows Frank to be a superb legislator—a pragmatic politician who has dedicated his career to pursuing an unabashedly liberal agenda and whose depth of intellect and sense of humor have made him one of the most influential and colorful figures in Washington.

Praise For Barney Frank: The Story of America's Only Left-Handed, Gay, Jewish Congressman…

"Barney Frank is a masterful legislator and one of the great political minds of our generation. His style—principled but pragmatic, tenacious yet fair, and always brilliant and funny—has won him the respect of his colleagues on both sides of the aisle. Stuart Weisberg's lively biography of Barney Frank documents all of these extraordinary qualities, and the many ways in which he enriches our democracy."—Nancy Pelosi, Speaker of the U.S. House of Representatives

"Barney Frank is one of the most brilliant, effective—and funny—lawmakers of his generation. Not many Congressmen are worthy of a book, but Stuart Weisberg's carefully researched and authoritative account proves that Barney's life and career are indeed the stuff of fine biography."—Cokie Roberts, Steven V. Roberts, ABC News political commentator / Shapiro Professor of Media and Public Affairs, George Washington University

"Stuart Weisberg's biography of Barney Frank is not just definitive—it's as entertaining and fascinating as its subject."—Jeffrey Toobin, author of The Nine: Inside the Secret World of the Supreme Court

"Someone once said to me, 'Barney Frank talks very fast.' I said, 'Yes, but his mind operates even faster.' I love the beauty and agility of his mind, his extraordinary brilliance, and his intuitive sense of what is right to do in this country. We laughed together, we cried together—we won some battles, we lost some battles—but I was very honored to serve with this gentleman. Stuart Weisberg reveals Barney Frank's captivating personality in this riveting biography."—Ronald Dellums, Mayor of Oakland, California, and former Congressman

"Weisberg has assembled a thorough portrait of Frank and a compelling Baedecker to Massachusetts politics in the last quarter of the 20th century and the first decade of the 21st."—Boston Globe

"Weisberg creates a mesmerizing portrait of the legislator known for his wit, speaking skills, intellect, and political savvy, who, when he publicly came out in 1987, was the first serving Congressman to so declare. Starting with Frank's beginnings among the 'cohesive minority' of Jews in the all-white, heavily Roman Catholic, industrial town of Bayonne, New Jersey, Weisberg shows Frank being drawn early to politics—he campaigned for Stevenson in 1956 at age 16—but hiding his sexuality for 25 years. His political career began with moving from a Harvard teaching fellowship to Boston City Hall politics in reform mayor Kevin white's administration and eventually to election to Congress in 1980, where he rose to current chairmanship of the House Financial Services Committee. among the many compelling passages here are those detailing Frank's half-in, half-out of the closet life while in his forties—an unfortunate but understandable 'midlife adolescence' for a man who had previously paid male prostitutes and 'didn't have a social life until he was 45.' A significant additional to political and gay studies."—Booklist

Stuart Weisberg is an attorney who spent ten years as staff director and chief counsel for the House Government Operations Subcommittee on Employment and Housing. He directed the subcommittee's lengthy investigation in 1989 of what came to known as the "HUD scandal." During the Clinton administration, he served as chair of the Occupational Safety and Health Review Commission, an independent federal adjudicative agency. He lives in Bethesda, Maryland.
Loading...
or
Not Currently Available for Direct Purchase