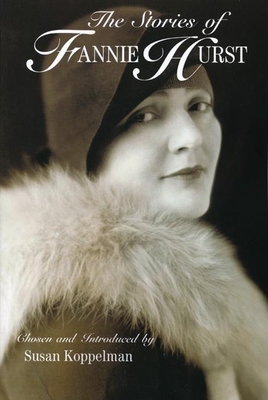 In her heyday, between 1910 and the mid-1930s, Fannie Hurst was the most popular writer in America. Twenty-nine films were based on her novels and short stories. Her fiction was not only beloved by readers, but also acclaimed by reviewers and regularly included in Best American Short Stories. And yet not one of her books remains in print.

The publication of this selection of Fannie Hurst's best short stories is sure to propel a long-overdue revival and reassessment of Hurst's work. No reader of these thirty stories, spanning the years 1912 to 1935, can fail to recognize Hurst's depth, intelligence, and artistry as a writer. Hurst was the one of the premier literary chroniclers of poor and working-class urban life in early 20th-century America, especially the vibrant life of Jewish immigrant communities. She was also a pioneer in writing about the lives of working women, from maids to secretaries to garment workers, from prostitutes to artists. And she wove these threads into captivating, deeply human stories that capture her characters' struggles, triumphs, conflicts, and loves.

Fannie Hurst (1889-1968) was born in Ohio, grew up in St. Louis, and spent her adult life in New York City. She is the author of seventeen novels and more than 250 short stories, as well as plays, screenplays, memoirs, essays, and articles. Her best-remembered works are those turned into films, including Imitation of Life, Back Street, Humoresque, The Younger Generation, and Young at Heart. She was also active in a variety of progressive Jewish, social justice, labor, peace, and women's organizations. Susan Koppelman is a pioneering literary historian, acknowledged as the leading authority on the women's short story in the United States. Her ten anthologies include Between Mothers and Daughters and The Strange History of Suzanne LaFleshe.
or
Not Currently Available for Direct Purchase
Copyright © 2020 American Booksellers Association