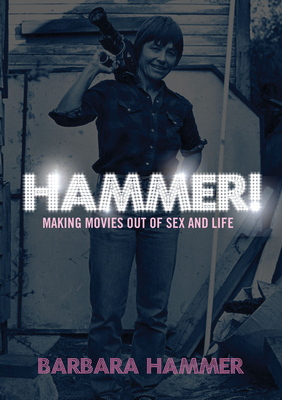 Making Movies Out of Life and Sex

HAMMER is the first book by influential filmmaker Barbara Hammer, whose life and work have inspired a generation of queer, feminist, and avant-garde artists and filmmakers. The wild days of non-monogamy in the 1970s, the development of a queer aesthetic in the 1980s, the fight for visibility during the culture wars of the 1990s, and her search for meaning as she contemplates mortality in the 2000s--HAMMER includes texts from these periods, new writings, and fully contextualized film stills to create a memoir as innovative and disarming as her work has always been. HAMMER was the winner for the 2010 Judy Grahn Award for Lesbian Nonfiction.

Barbara Hammer has made over eighty films and video works over the past forty years. Her experimental films of the 1970s often dealt with taboo subjects such as menstruation, female orgasm, and lesbian sexuality. She received the first Shirley Clarke Avant-Garde Filmmaker Award in October 2006, the Women In Film Award from the St. Louis International Film Festival in 2006, and the Teddy Award for best short film for A Horse Is Not A Metaphor at the 2009 International Berlin Film Festival.

Praise For Hammer!: Making Movies Out of Life and Sex…

Winner of the 2010 Judy Grahn Award for Lesbian Nonfiction