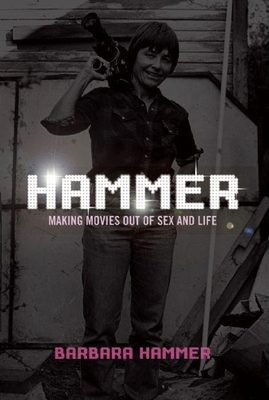 Making Movies Out of Sex and Life

"What an amazingly inspirational book, filled with powerful stories and beautiful images. I truly love and recommend it. Thank you, Barbara Hammer "--Sadie Benning, artist

"HAMMER is a brilliant and shimmering feast of art and activism. Barbara's fearless queer intelligence illuminates every page."--John Greyson, filmmaker "Now the gift of Hammer's sounds and images is matched by that of her words. Beautifully designed and illustrated, HAMMER is a striking book, from its title to its impact."--Patricia White, author of Uninvited: Classical Hollywood Cinema and Lesbian Representability "A candid and colorful memoir, HAMMER offers valuable primary source material and original feminist film theory by a pioneer of avant-garde American cinema."--Livia Bloom, film curator "Barbara Hammer is a true cinematic pioneer; her tremendous body of work continues to inspire audiences and artists alike."--Jenni Olson, LGBT film historian

HAMMER is the first book by influential filmmaker Barbara Hammer, whose life and work have inspired a generation of queer, feminist, and avant-garde artists and filmmakers. The wild days of non-monogamy in the 1970s, the development of a queer aesthetic in the 1980s, the fight for visibility during the culture wars of the 1990s, her search for meaning as she contemplates mortality in the past ten years--HAMMER includes texts from these periods, new writings, and fully contextualized film stills to create a memoir as innovative and disarming as her work has always been.

Barbara Hammer has made over eighty films and video works over the past forty years. Her experimental films of the 1970s often dealt with taboo subjects such as menstruation, female orgasm, and lesbian sexuality. In the 1980s she used optical printing to explore perception and the fragility of 16mm film life itself. Her documentaries tell the stories of marginalized peoples who have been hidden from history. Her most recent work, A Horse is Not a Metaphor, won the 2009 Teddy Award for Best Short Film at the Berlin International Film Festival. A retrospective screening of her work will be presented at the Museum of Modern Art in spring 2010 and will travel to the Reina Sophia in Madrid and the Tate Modern in London.

Barbara Hammer has made over 80 films over the past 40 years. Her films have been selected for the Whitney Museum of American Art biennials, Sundance Film Festival, Madrid International Women's Film Festival, and WACK!, an exhibit that has traveled from LA to DC, NYC, and Vancouver. A retrospective screening of her work will be at MoMA in spring 2010.
or
Not Currently Available for Direct Purchase
Copyright © 2020 American Booksellers Association