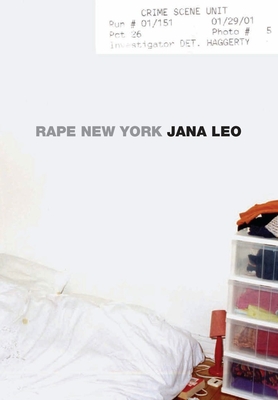 In the gripping first pages of this true story, Jana Leo relives the moment-by-moment experience of a home invasion and rape in her own apartment in Harlem. After she reports the crime, she waits. Between police disinterest and squabbles from the health insurance company over who's going to pay for the rape kit, she realizes that the violence of such an experience does not stop with the crime. Increasingly concerned that the rapist will return, she seeks help from her landlord, who refuses to address security issues on the property. She comes to understand that it is precisely these conditions of newly gentrified lower-income areas which lead to vulnerable living spaces, high turnover rates, and ultimately higher profits for slumlords. In this most singular memoir, Leo weaves a psychological journey into an analysis that becomes equally personal: the fault lines of property mismanagement, class vulnerabilities, and a deeply flawed criminal justice system. In a stunning conclusion, Leo has her day in court.

"Jana Leo’s Rape New York re-fractures and reconstructs the story of her rape and its aftermath; in re-presenting the constellation of events that lead to and from that attack, Leo represents life in all its random brutality and orchestrated dignity—in other words, the best that can be said about this book is that it is true, which is the only real measure of real art, and honest existence."—Vanessa Place, author of The Guilt Project and Statement of Facts

"Your front door lock is broken and your landlord doesn't give a damn. Jana Leo's exploration of the public and private spaces in Rape New York effectively merges the vulnerability of the city with that of the body itself. A powerful and engrossing work."—Arthur Nersesian, author of The Fuck-Up

Jana Leo taught at Cooper Union for seven years, and now divides her time between Madrid and New York. In 2007, she founded Civic Gaps, a New York think tank dedicated to studying empty or neglected spaces in the city. With support from the Ministry of Culture, she also founded the MOSIS Foundation, an urban planning think tank in Madrid that builds and tests models which strive to connect people and places through art. Leo earned a MA in architecture from Princeton and a PhD in philosophy and art from the Universidad Autonoma de Madrid. Rape New York is her first book in English.
Loading...
or support indie stores by buying on