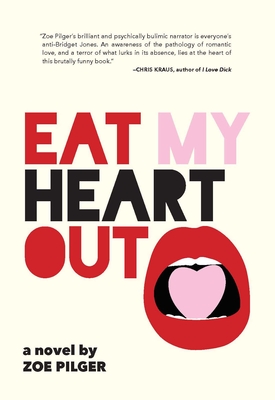 Eat My Heart Out (Paperback)

At twenty-three, Ann-Marie is single, broke, and furious, and convinced that love--sweet love --is the answer to all of her problems. Then she meets legendary second wave feminist Stephanie Haight, who becomes obsessed with the idea that she can save Ann-Marie and her entire generation. From Little Mermaid-themed warehouse parties and ritual worship ceremonies summoning ancient goddesses to disastrous one-night stands with strikingly unsuitable men, Ann-Marie hurtles through London and life. Fiercely clever and unapologetically wild, Eat My Heart Out is the satire for our narcissistic, hedonistic, post-postfeminist era.

Zoe Pilger is an art critic for The Independent and winner of the 2011 Frieze International Writers Prize. She has appeared on BBC Newsnight's The Review Show, Channel Four's Sunday Brunch, and Sky News. Eat My Heart Out is her first novel. It was published in the UK by Serpent's Tail to wide acclaim, garnering positive reviews from publications such as Marie Claire, The Daily Mail, the Financial Times, and the New Statesman.
or
Not Currently Available for Direct Purchase
Copyright © 2020 American Booksellers Association