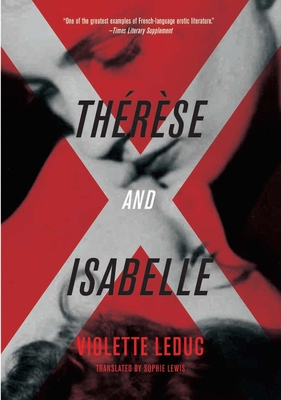 Two French schoolgirls discover obsessive pleasures in repressed secrets in this "masterpiece on the tyranny of love" (Independent, UK).

Censored for half a century for its vivid depiction of budding female sexuality, this is the "dark and luminous" (Nicole Borssard) novel of two young women in the consuming and at times frightening throes of first love. Navigating their schoolgirl relationship becomes a rapturous secret, as they sneak away from repressive boundaries to go beyond the limits of friendship with "all the raw urgency of female adolescent sexuality: its energy and intensity, the push-pull of excitement, its dangers and glories" (Kate Millett, award-winning author of Sexual Politics and Mother Millett).

Filmed in 1968 by Radley Metzger, starring Essy Persson and Anna Ga l, Th r se and Isabelle is finally available as it was intended to be read. "I have waited a very long time to slip back into the unexpurgated, delicious darkness with these iconic lesbian lovers" (Amber Dawn, Lambda Literary Award-winning author Sodom Road Exit).

Violette Leduc (1907-1972) has been referred to as France's greatest unknown writer. Admired by Jean Genet, Nathalie Sarraute, and Albert Camus, Leduc was championed by Simone de Beauvoir when she published her scandalous autobiography La Batarde (1964). Like Therese and Isabelle, many of her audacious novels are largely inspired by her life. She is the subject of Martin Provost's biopic, Violette (2013).
Loading...
or support indie stores by buying on