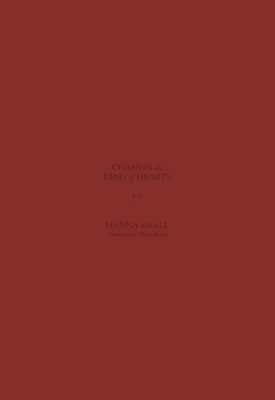 Chasing the King of Hearts

Winner of the 2018 PEN Translation Prize

One of Publishers Weekly's Best Books of 2017

This canonical work of Polish reportage is a terse, unexpected human lesson born of an occupation-era love story. Based on a true story, the raw interplay of history and fictionalization spans the Warsaw Ghetto, the war-torn countryside, and the nightmare of Auschwitz.

This is the book's first US publication.

Hanna Krall was born in 1935 in Poland and survived the Holocaust by hiding in a cupboard. She has received numerous Polish and international awards, such as the Polish PEN Club Prize and the German Wurth Preis for European Literature 2012, and has been translated into seventeen languages.

Hanna Krall was born in 1935 in Poland and survived the Second World War hiding in a cupboard. She began her writing career as a prize-winning journalist. Since the early 80s she has worked as a novelist. She has received numerous Polish and international awards, such as the underground Solidarity Prize, Polish PEN Club Prize and the German Wurth Preis for European Literature 2012. Translated into seventeen languages, her work has gained widespread recognition. In 2007, Krol kier znow na wylocie (Chasing the King of Hearts) was shortlisted for the Angelus Central European Literary Award. Philip Boehm, born 1958, is an American playwright, theatre director and literary translator. Born in Texas, he was educated at Wesleyan University, Washington University in St. Louis, and the State Academy of Theater in Warsaw, Poland. Boehm is the founder of the Upstream Theater in St. Louis, which has become known for its productions of foreign plays. Boehm has translated more than twenty literary works from German and Polish. He has won numerous prizes for his translations, including the Schlegel-Tieck Prize and the Oxford-Weidenfeld Translation Prize, as well as various awards from the American Translators Association, the National Endowment for the Arts, PEN America, the Austrian Ministry of Culture, and the Texas Institute of Letters. Born in 1966, Mariusz Szczygiel has been a reporter for Gazeta Wyborcza since 1990. He is the recipient of numerous awards for his writing on Poland and Czechoslovakia, including the Europe Book Prize and the Prix l'Amphi for his book Gottland, which was published in the US in 2014. From 1995-2001, he hosted his own talk show ("Na kazdy temat", "On Any Topic"). Together with Wojciech Tochman and Pawel Gozlinski, he runs the Polish Reportage Institute in Warsaw.
Loading...
or support indie stores by buying on