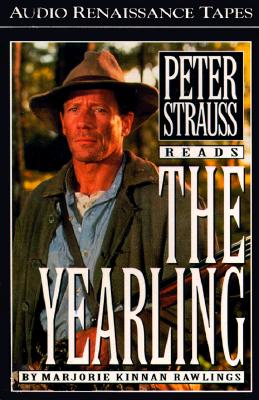 The classic Pulitzer prize-winning novel read by the star of the TV movie.
It all started the day the rattlesnake bit Jody Baxter's pa, Penny, in the arm. The doe and her fawn just happened to be nearby. Penny shot the doe and used its liver to try to draw the deadly venom out of his veins. By the time they got Penny home, he was near dead. And as much pain as Jody was in for his pa, he hurt for the orphaned fawn, too. So he went back the next day and brought the newborn home.
The magic of "The Yearling" has touched and enchanted us for nearly six decades. Here's the joy, sadness and hardships faced by the Baxter family in the heart of the wild, dangerous Florida scrub. Here's the story of the hunt for the vicious marauding bear, Slewfoot, the deadly winter floods, and the running battles with the rough and rowdy Forrester clan. But here, too, is the beauty and wonder of the land: the humming bees, fragile lavender, sweet bay and magnolias.
And, at last, here is the tale of a boy and the yearling fawn he would come to love and cherish, and name Flag, after its small white tail -- a boy who becomes a man, as he learns to make the brutally hard choices that life sometimes demands of us all.

Marjorie Kinnan Rawlings (1896-1953) lived for 25 years in Cross Creek, Florida, the area that is the setting for "The Yearling." She is the author of several earlier novels as well as a memoir, "Cross Creek," which inspired the acclaimed motion picture of the same name. Peter Strauss made his Broadway debut in Tom Griffin's "Einstein and the Polar Bear." His feature film credits include "Soldier Blue," "The Last Tycoon," "Nick of Time," "License to Wed," and "The Wilderness Family." His many television credits include starring in the TV films "Young Joe," "The Forgotten Kennedy," "The Yearling," and "Murder on the Orient Express." Peter read Marjorie Kinnan Rawlings's Pulitzer Prize-winning classic "The Yearling" for Macmillan Audio. He currently lives in Ojai, California, where he also operates a commercial citrus enterprise.
Loading...
or
Not Currently Available for Direct Purchase