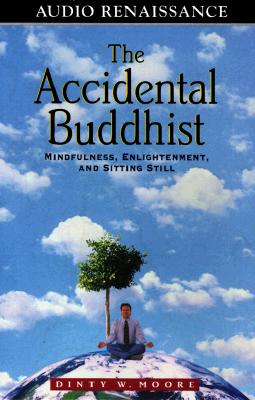 When Dinty Moore was fifteen and on a Catholic Youth retreat weekend at a monastery in upstate New York, he thought for a brief moment he might grow up to be a priest. Instead, over the years, he lost his faith. "Twenty-five years later, I found myself at the doorway of a different monastery," Moore writes. " And the monks? Well, this time the monks were Buddhists."

The Accidental Buddhist is the funny, provocative story of how Dinty Moore, as American as Huckleberry Finn, went looking for the faith he'd lost in what might seem the most unlikely of places: the ancient Eastern tradition of Buddhism. Like George Plimpton venturing into the world of professional sports, Dinty Moore enters the retreat centers, zendos, and meditation halls that have been taking root in every corner of America.

Moore takes the time to see what Buddhism has to offer the harried, hassled American of the new century. He explores the different varieties of American Buddhism, attends rallies, even tracks down and questions the Dalai Lama. In the process, much to his own surprise, he finds himself fascinated and moved by what he encounters.

For anyone who has wondered about the gorwing visibility of Buddhism, Dinty Moore demystifies and explains the contradictions and concepts of this most mystic-seeming of religious traditions, while putting it into an American context. Those already interested in Buddhism will find The Accidental Buddhist a plain-spoken, insightful look at the dharma in America.

Praise For The Accidental Buddhist: Mindfulness, Enlightenment and Sitting Still…

"Moore's hilarious and sometimes irreverent look at Buddhism is a perfect primer for the budding Buddhist." - Publishers Weekly (Sept 15, 1997)

Dinty W. Moore has worked as a documentary filmmaker, professional modern dancer, wire service journalist, and college creative writing professor. He has published fiction and poetry in numerous literary magazines and was awarded a 1992 National Endowment for the Arts Fellowship in Fiction Writing. He is the author of one book of nonfiction, "The Emperor's Virtual Clothes: The Naked Truth About Internet Culture." He lives with his wife and daughter in State College, Pennsylvannia.

Read by Jack Hawkins.
Loading...
or
Not Currently Available for Direct Purchase