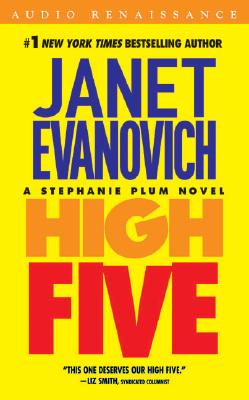 Out of bail skippers and rent money, Stephanie throws caution to the wind and follows in the entrepreneurial bootsteps of Super Bounty Hunter, Ranger, engaging in morally correct and marginally legal enterprises. So, a scumball blows himself to smithereens on her first day of policing a crack house and the sheik she was chauffeuring stole the limo. But hey, nobody's perfect Anyway, Stephanie has other things on her mind. Her mother wants her to find Uncle Fred who's missing after arguing with his garbage company; homicidal rapist Benito Ramirez is back, quoting scripture and stalking Stephanie; vice cop Joe Morelli has a box of condoms with Stephanie's name on it; and Stephanie's afraid Ranger has his finger on her trigger. The whole gang's here for mirth and mayhem. Read at your own risk in public places.

Janet Evanovich is the #1 bestselling author of "Seven Up "and "Hard Eight." She lives in New Hampshire. Debi Mazar, a New York native, made her feature film debut in Martin Scorsese's "Goodfellas" as Ray Liotta's junkie mistress. From that auspicious beginning, she has appeared in numerous films, such as "Little Man Tate," "Toys," "Bullets Over Broadway," "Batman Forever," "The Insider," "Collateral," and "Be Cool." She has had recurring roles on "The Practice," the HBO series "Entourage" and "Ugly Betty," and has appeared on "Dancing with the Stars." Debi has narrated a number of titles of the "New York Times" #1 bestselling Stephanie Plum series by Janet Evanovich.
or
Not Currently Available for Direct Purchase
Copyright © 2020 American Booksellers Association