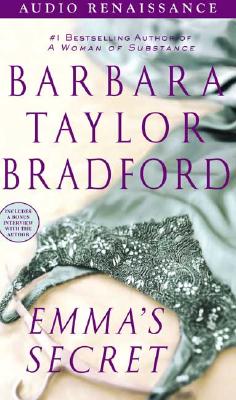 "The legendary Emma Harte, heroine of "A Woman of Substance," returns in "Emma's Secret," an audiobook that showcases the storytelling power of Barbara Taylor Bradford."
Paula O'Neill, beloved granddaughter of Emma Harte and the guardian of her vast business empire, believes that everything Emma left to the family is secure. However, beneath the surface, sibling rivalry and discontent flare. Linnet and Tessa, her daughters, are as different as two women can be. One of them wants desperately for the empire to be hers but has a devastating secret that may put her very life in danger.
Into this volatile mix walks Evan Hughes, a young American fashion designer who is looking for Emma Harte. But Emma has been dead for thirty years. And Evan bears an uncanny resemblance to Paula O'Neill. Troubled by Evan's presence, Paula turns to her grandmother's recently discovered wartime diaries to find the truth, and Emma comes vividly back to life.
The decades fall away. It is London in 1940: the Blitz. Emma, working hard under war-time conditions, is also holding her family together as bombs drop, sirens wail, and her sons go off to war. While she struggles with grief, her indomitability, willpower, and strength come to the fore. As the pages unfurl, Paula discovers the secret Emma took to the grave to protect others, a secret whose repercussions inevitably change lives and may shake a dynasty to its very foundations.

"Emma Harte is one of those characters whom we never want to leave behind, and thank goodness Bradford has brought her back to us with a story worthy of this truly remarkable woman."--RT Book Reviews "Barbara Taylor Bradford has woven yet another enchanting episode in the continuing saga of the Harte
family .... It is no surprise that Barbara Taylor Bradford's books have sold more than 70 million copies in over ninety countries and forty different languages."--Bookreporter.com “Barbara Taylor Bradford is the storyteller of substance.”— Times (London)

“An extravagant, absorbing novel of love, courage, ambition, war, death and passion.” —The New York Times on A Woman of Substance

“Pure gold."—Cosmopolitan on Act of Will

”She is one of the world’s best at spinning yarns.“ —The Guardian (UK) on Dangerous to Know

"This story has suspense, intrigue and high drama as Bradford reels the listener in with period details. Kate Reading has a cornucopia of voices. She easily slips into an upper-class English accent, adds pomposity for some of the English gentlemen, and then switches back to Evan's American accent. Although this is the present-day sequel to Bradford's trilogy that began with A Woman of Substance, it can stand alone."--KLIATT

BARBARA TAYLOR BRADFORD is the bestselling author of eighteen novels and a 2003 inductee into the Writer's Hall of Fame. A native of Yorkshire, England, she now lives in New York with her husband.
Loading...
or
Not Currently Available for Direct Purchase