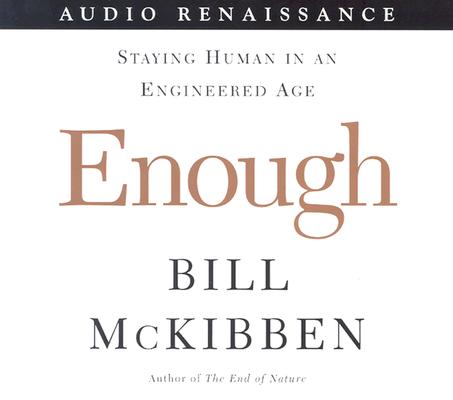 We are on the verge of crossing the line from born to made, from created to built. Sometime in the next few years, a scientist will reprogram a human egg or sperm cell, spawning a genetic change that could be passed down into eternity. We are sleepwalking toward the future, argues Bill McKibben, and it’s time to open our eyes.

In The End of Nature, nearly fifteen years ago, McKibben demonstrated that humanity had begun to irrevocably alter--and endanger--our environment on a global scale. Now he turns his eye to an array of technologies that could change our relationship not with the rest of nature but with ourselves. He explores the frontiers of genetic engineering, robotics, and nanotechnology--all of which we are approaching with astonishing speed--and shows that each threatens to take us past a point of no return. We now stand at a critical threshold, poised between the human past and a post-human future.

Ultimately, McKibben offers a celebration of what it means to be human, and a warning that we risk the loss of all meaning if we step across the threshold. His wise and eloquent book argues that we cannot forever grow in reach and power--that we must at last learn how to say, "Enough."

Praise For Enough: Staying Human in an Engineered Age…

“Fiercely important . . . the most thought-provoking piece of non-fiction I’ve read in a long time.” —The Globe and Mail (Toronto)

“In Enough, McKibben shines his powerful light on another momentous change that is upon us: the ability to re-engineer ourselves and therefore the very meaning of human identity. If he is right, then humankind stands on a moral and existential threshold—or cliff. We would do well as a society to weigh his bracing argument before taking another step.” —Michael Pollan, author of The Botany of Desire

Bill McKibben writes regularly for "The New York Review of Books, The New York Times, Natural History," and many other publications. His first book, "The End of Nature," was published in 1989 and was a national bestseller. His other books include "Maybe One, The Age of Missing Information, "and "Long Distance: A Year of Living Strenuously." He lives with his wife, the writer Sue Halpern, and daughter in Vermont.
Loading...
or
Not Currently Available for Direct Purchase