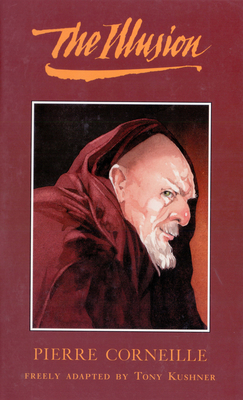 "The most lavish and picturesque special effects are what come out of the mouths of the people onstage...Mr. Kushner makes words sing, swoon and somersault as no other living American playwright does." -Ben Brantley, New York Times "Rapture comes naturally to playwright Tony Kushner, and in The Illusion, he plants a big swoony kiss on the lips of the theater." -Nelson Pressley, Washington Post " The Illusion] certainly has the stamp of Kushner's delight in language. This is a modern interpretation, filled with energy, colour and humour." -Telegraph (UK) "Fantastical tribute to the magic of theater...You may resist its charms at first, but soon enough you soften and, intoxicated by Kushner's language and swayed by the music of his ideas, you submit to The Illusion's ravishments." -TimeOut New York Tony Kushner's adaptation of The Illusion triumphs as a thoroughly modern rendering of Pierre Corneille's neoclassical French comedy while featuring the exquisite wordplay, beguiling comedy and fierce intelligence found in all of Kushner's work. An enchanting argument for the power of theatrical imagination over reality, The Illusion weaves obsession and caprice, romance and murder, fact and fiction, into an enticing exploration of the greatest illusion of all--love.

Tony Kushner's plays include Angels in America; Hydriotaphia, or the Death of Dr. Brown; The Illusion, adapted from the play by Pierre Corneille; Slavs!; A Bright Room Called Day; Homebody/Kabul; Caroline, or Change, a musical with composer Jeanine Tesori; and The Intelligent Homosexual's Guide to Capitalism and Socialism with a Key to the Scriptures. He wrote the screenplays for Mike Nichols's film of Angels in America and for Steven Spielberg's Munich and Lincoln. His books include The Art of Maurice Sendak: 1980 to the Present; Brundibar, with illustrations by Maurice Sendak; and Wrestling with Zion: Progressive Jewish-American Responses to the Israeli-Palestinian Conflict, co-edited with Alisa Solomon.Among many honors, Kushner is the recipient of a Pulitzer Prize, two Tony Awards, three Obie Awards, two Evening Standard Awards, an Olivier Award, an Emmy Award, two Oscar nominations, and the Steinberg Distinguished Playwright Award. He is a member of the American Academy of Arts and Letters. In 2012, he was awarded a National Medal of Arts by President Barack Obama. He lives in Manhattan with his husband, Mark Harris.
Loading...
or support indie stores by buying on