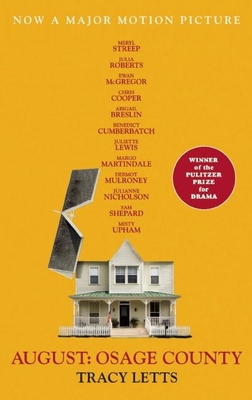 Winner of the 2008 Pulitzer Prize for Drama and the 2008 Tony Award for Best New Play. Now a major motion picture A tremendous achievement in American playwriting: a tragicomic populist portrait of a tough land and a tougher people. --TimeOut New York Tracy Letts' August: Osage County is what O'Neill would be writing in 2007. Letts has recaptured the nobility of American drama's mid-century heyday while still creating something entirely original. --New York magazine "I don't care if August: Osage County is three-and-a-half hours long. I wanted more." -Howard Shapiro, Philadelphia Inquirer This original and corrosive black comedy deserves a seat at the table with the great American family plays.--Time One of the most bracing and critically acclaimed plays in recent history, August: Osage County is a portrait of the dysfunctional American family at its finest--and absolute worst. When the patriarch of the Weston clan disappears one hot summer night, the family reunites at the Oklahoma homestead, where long-held secrets are unflinchingly and uproariously revealed. The three-act, three-and-a-half-hour mammoth of a play combines epic tragedy with black comedy, dramatizing three generations of unfulfilled dreams and leaving not one of its thirteen characters unscathed.
August: Osage County has been produced in more than twenty countries worldwide and is now a major motion picture starring Meryl Streep, Julia Roberts, Chris Cooper, Dermot Mulroney, Sam Shepard, Juliette Lewis, and Ewan McGregor. Tracy Letts is the author of Killer Joe, Bug, and Man from Nebraska, which was a finalist for the 2004 Pulitzer Prize for Drama. His plays have been performed throughout the country and internationally. A performer as well as a playwright, Letts is a member of the Steppenwolf Theatre Company, where August: Osage County premiered.

Tracy Letts was awarded the 2008 Pulitzer Prize for Drama and Tony Award for Best Play for August: Osage County, which premiered at Steppenwolf Theatre Company in 2007 before playing Broadway, London's National Theatre, and a forty-week US tour. Other plays include Pulitzer Prize finalist Man from Nebraska; Killer Joe, which was adapted into a critically acclaimed film; and Bug, which has played in New York, Chicago, and London and was adapted into a film. Letts is an ensemble member of Steppenwolf Theatre Company and garnered a Tony Award for his performance in the Broadway revival of Who's Afraid of Virginia Woolf?
Loading...
or
Not Currently Available for Direct Purchase