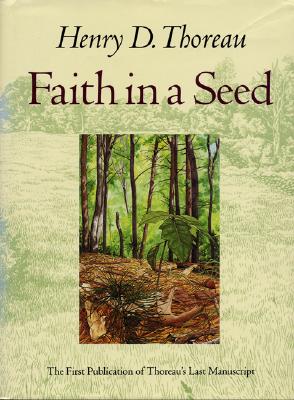 Faith in a Seed

The Dispersion Of Seeds And Other Late Natural History Writings

Faith in a Seed contains the hitherto unpublished work The Dispersion of Seeds, one of Henry D. Thoreau's last important research and writing projects, and now his first new book to appear in 125 years.

With the remarkable clarity and grace that characterize all of his writings, Thoreau describes the ecological succession of plant species through seed dispersal. The Dispersion of Seeds, which draws on Charles Darwin's theory of natural selection, refutes the then widely accepted theory that some plants spring spontaneously to life, independent of roots, cuttings, or seeds. As Thoreau wrote: "Though I do not believe a plant will spring up where no seed has been, I have great faith in a seed. Convince me that you have a seed there, and I am prepared to expect wonders."

Henry D. Thoreau's Faith in a Seed, was first published in hardcover in 1993 by Island Press under the Shearwater Books imprint, which unifies scientific views of nature with humanistic ones. This important work, the first publication of Thoreau's last manuscript, is now available in paperback. Faith in a Seed contains Thoreau's last important research and writing project, The Dispersion of Seeds, along with other natural history writings from late in his life. Edited by Bradley P. Dean, professor of English at East Carolina University and editor of the Thoreau Society Bulletin, these writings demonstrate how a major American author at the height of his career succeeded in making science and literature mutually enriching.

Gary Paul Nabhan is an internationally celebrated nature writer, food and farming activist, and proponent of conserving the links between biodiversity and cultural diversity. He has been been honored as a pioneer and creative force in the “local food movement” and seed saving community by Utne Reader, Mother Earth News, New York Times, Bioneers, and Time magazine.
As the W.K. Kellogg Endowed Chair in Sustainable Food Systems at the University of Arizona Southwest Center, he works with students, faculty and non-profits to build a more just, nutritious, sustainable, and climate-resilient foodshed spanning the U.S./Mexico border. He was among the earliest researchers to promote the use of native foods in preventing diabetes, especially in his role as a co-founder and researcher with Native Seeds/SEARCH. Gary is also personally engaged as an orchard-keeper, wild foods forager, and pollinator habitat restorationist working from his small farm in Patagonia, Arizona near the Mexican border. He has helped forge “the radical center” for collaborative conservation among farmers, ranchers, indigenous peoples and environmentalists in the West. He played key roles in establishing the Ironwood Forest National Monument, community-based seed banks, land reserves for conserving wild crop relatives, and restored habitats for migratory pollinators throughout the West.
Agricultural historian Peter Hatch of Monticello has called Nabhan “the lyrical scholar of genetic diversity.” As an Arab-American essayist and poet, he is author or editor of twenty-four books, some of which have been translated into Arabic, Spanish, Italian, French, Croation, Korean, Chinese and Japanese. For his creative writing and its influence on community-based conservation, he has been honored with a MacArthur “genius” award, a Lannan Literary Fellowship, a Southwest Book Award, the John Burroughs Medal for nature writing, the Vavilov Medal, and several honorary degrees and lifetime achievement awards.
He works most of the year as a research scientist at Tumamoc Hill and the Southwest Center of the University of Arizona, but he is also engaged with several food justice and farming alliances, including Sabores Sin Fronteras, Santa Cruz Valley Heritage Alliance, Wild Farm Alliance, Renewing America’s Food Traditions, and the Borderlands Habitat Restoration Initiative. Nabhan is humbled and honored to serve as a professed Ecumenical Franciscan brother, helping the Franciscan Action Network in shaping ethical responses to environmental injustice, to immigration issues, and to climate change.