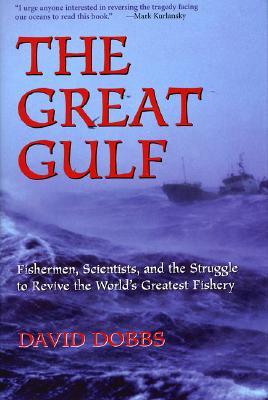 Fishermen, Scientists, and the Struggle to Revive the World's Greatest Fishery

For hundreds of years, the New England cod fishery was one of the most productive in the world, with higher average annual landings than any comparable ocean area. But in the late 1980s, fish catches dropped precipitously, as the cod, flounder, and other species that had long dominated the region seemed to lose their ability to recover from the massive annual harvests. Even today, with fishing sharply restricted, populations have not recovered.

Largely overlooked in this disaster is the intriguing human and scientific puzzle that lies at its heart: an anguished, seemingly inexplicable conflict between government scientists and fishermen over how fish populations are assessed, which has led to bitter disputes and has crippled efforts to agree on catch restrictions. In The Great Gulf, author David Dobbs offers a fascinating and compelling look at both sides of the conflict.

With great immediacy, he describes the history of the fisheries science in this most studied of oceans, and takes the reader on a series of forays over the Gulf of Maine and Georges Bank on both fishing boats and research vessels. He introduces us to the challenges facing John Galbraith, Linda Despres, and Jay Burnett, passionate and dedicated scientists with the National Marine Fisheries Service who spend countless hours working to determine how many fish there really are, and to the dilemma of Dave Goethel, a whipsmart, conscientious fisherman with 20 years's experience who struggles to understand the complex world he works in while maintaining his livelihood in an age of increasing regulation.

Dobbs paints the New England fishery problem in its full human and natural complexity, vividly portraying the vitality of an uncontrollable, ultimately unknowable sea and its strange, frightening, and beautiful creatures on the one hand, and on the other, the smart, irrepressible, unpredictable people who work there with great joy and humor, refusing to surrender to the many reasons for despair or cynicism. For anyone who read Cod or The Perfect Storm, this book offers the next chapter of the story -- how today's fishers and fisheries scientists are grappling with the collapse of this fishery and trying to chart, amid uncertain waters, a course towards its restoration.

David Dobbs is a writer who lives in Montpelier, Vermont. A frequent contributor to Audubon, he is co-author of The Northern Forest (Chelsea Green, 1995), which won the Sigurd F. Olson Award for Excellence in Nature Writing and numerous other awards.