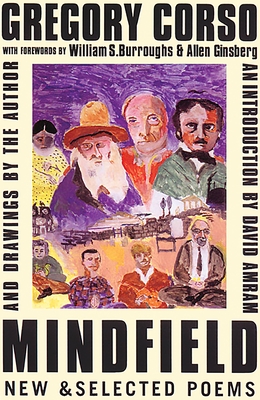 Republished with a new cover and a new introduction by David Amram, this publication includes forewords by two legendary Beat writers, William S. Burroughs and Allen Ginsberg.
New rare sketches and notes from the author's personal journal, forewords from two of the world's leading poets of the Beat Generation, and an introduction by David Amram, the man who collaborated with Jack Kerouac in the first-ever live poetry reading in 1957, are collected here for the first time in this revised and unique edition of Mindfield. This poetry is an affront to all that limits, restrains, or frightens. "Death I unsalute you," Gregory declares. Beyond energy and sheer brilliance, these poems offer the wisdom of a man unstuck and a mind content with the freedom of knowing truth without being afraid of it.

Gregory Corso was born in New York City in 1930. In 1956, he moved to the West Coast where he contributed to the extraordinary artistic ferment of the era, becoming a central figure in the emerging Beat Generation literary movement. Since 1961, he has alternated travel and residence in Europe and New York with teaching residencies. He has published seven previous book sin the U.S. since 1955.
David Amram is a pioneer of World Music, virtuoso, performer, conductor, and composer of uncompromising originality. Since the 1950s, Amram's compositions and his unique approach to music have found a worldwide audience. He lives in New York City.
Loading...
or support indie stores by buying on