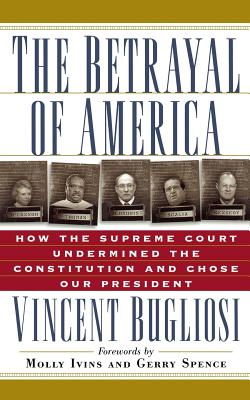 The Betrayal of America (Paperback)

How the Supreme Court Undermined the Constitution and Chose Our President

During the course of American history, wrongful events have occurred and certain Americans have stood up and spoken out against these wrongs: Tom Paine, Edward R. Murrow, Daniel Ellsberg. Vincent Bugliosi takes his place in this special pantheon of patriots with his powerful, brilliant, and courageous expose of crime by the highest court in the land. When an article he wrote on this topic appeared in The Nation magazine in February 2001, it drew the largest outpouring of letters and e-mail in the magazine's 136-year history, tapping a deep reservoir of outrage. The original article is now expanded, amended, and backed by amplifications, endnotes, and the relevant Supreme Court documents.

Vincent Bugliosi received his law degree in 1964. In his career at the L.A. County District Attorney's office, he successfully prosecuted 105 of 106 felony jury trials, including twenty-one murder convictions without a single loss. His most famous trial, the Charles Manson case, became the basis of his classic, Helter Skelter, the biggest selling true-crime book in publishing history. And the Sea Will Tell, Outrage, and The Prosecution of George W. Bush for Murder were also New York Times bestsellers. HBO will produce his Reclaiming History: The Assassination of President John F. Kennedy as a ten-hour mini-series. He lives in Pasadena, California.
or support indie stores by buying on
Copyright © 2020 American Booksellers Association